Prototypes of Chinas Exascale Supercomputers Point to Some New Realities

Two prototypes of China’s initial batch of exascale supercomputers are now up and running according to local news reports. And neither of them appears to be based on x86 technology.

The first system, a prototype of Tianhe-3, was announced at the 2nd World Intelligence Congress on May 17, where the system was displayed by the National Supercomputing Center in Tianjin. In a report by the Xinhuanet news agency, pictures of the prototype show a six-rack system, with one of the open racks sporting 20 server blades. A subsequent report by the news agency on July 27 stated the prototype is “complete” and showed what appeared to be larger system in a somewhat different rack enclosure. The Tianhe-3 exascale supercomputer is scheduled to boot up in 2020. 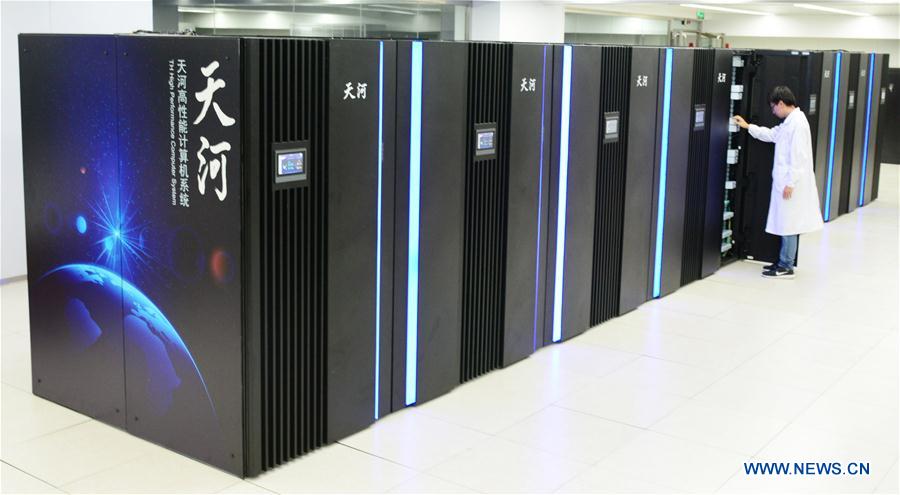 No details were provided in any of these reports as far as the prototype’s internals or computational capabilities. Supposedly, the Tianjin exascale machine will be based on Chinese-designed Arm technology, likely some version of Phytium’s Xiaomi platform. In 2016, Phytium revealed it had developed a 64-core Arm CPU, known as the FT-2000/64, for high-end server work. At the time, the company claimed the FT-2000/64 had a peak performance of 512 gigaflops – not nearly powerful enough for a practical exascale machine, but certainly suitable for a prototype. Of course, the system could also be built from generic Arm processors or, for that matter, from any processor that can emulate an Arm instruction set.

As we’ve noted before, China is not the only country with designs on Arm technology for supercomputing. Japan is building its first exascale machine, Post-K, based on a Fujitsu-designed Arm SVE chip. The company recently revealed it had completed a prototype of the processor. Likewise, the EU’s European Processor Initiative (EPI) looks like it will rely on Arm technology to develop processors for Europe’s pre-exascale and exascale systems. Even the US is getting serious about Arm-based supercomputing. HPE recently announced that Sandia National Laboratories will soon be installing a 2.3-petaflop system, known as Astra, using Cavium ThunderX2 processors.

The second Chinese prototype system, which was announced on August 5, is the precursor to the Sunway exascale machine that is slated to be installed at the National Supercomputing Center in Jinan. The prototype was developed by center researchers, along with teams from the National Research Center of Parallel Computer Engineering and Technology (NRCPC) and the Pilot National Laboratory for Marine Science and Technology (Qingdao). According to Yang Meihong, director of the National Supercomputing Center in Jinan, they expect the actual exascale system to be built in “the second half of 2020 or the first half of 2021.”

A report by Sdchina (the Information Office of Shandong Provincial People’s Government) and attributed to China Daily, states that the performance of the Sunway prototype is triple that of the Sunway Bluelight supercomputer (1.0 peak petaflops/795.9 Linpack teraflops), which is currently ranked 420 on the TOP500 list. If that’s the case, we should expect to see the Sunway prototype show up on the next TOP500 list in November.

The Sdchina writeup goes on to say that prototype has already run 35 applications, including those in climate change, ocean simulation, biomedical simulation, big data processing and brain-like intelligence. Although once again, no mention was made of the system internals, presumably the Sunway prototype is based on some version of the ShenWei processor. The original BlueLight machine, which is still cranking away at the Jinan center, is powered by 16-core ShenWei 1600 (SW1600) processors. The newer and much more powerful Sunway TaihuLight machine uses the 260-core ShenWei 26010 (SW26010) chips.

It’s a good bet that the prototype of China’s third exascale system is currently under development. This machine is slated to be built by Sugon and is expected to be based on home-grown x86 silicon, which China now has thanks to a licensing agreement between Hygon and AMD. And since Hygon announced last month that it is now producing such chips, the last major impediment to domestically produced x86-powered supercomputers has been removed.

At this point, Hygon can only implement processors using AMD’s first-generation Zen EPYC microarchitecture, so their ability to power an exascale machine on their own is rather limited. But again, for a prototype system, the Zen chips would probably suffice. And if Hygon follows up with Zen 2 and Zen 3 licensing agreements (or perhaps even deals to implement AMD Radeon GPU or APU designs), an x86-powered Chinese exascale machine would certainly be possible.

The roll-out of these prototypes suggests that the Tianhe-3 system will be China’s first exascale supercomputer, followed by the Sunway and Sugon machines. That implies a rather remarkable development, namely that of the four HPC superpowers – China, the EU, Japan, and the US – all of them, except for the US, could enter the exascale era with Arm technology rather than x86 hardware. Considering that there are currently no Arm-powered supercomputers that have even reached the petascale level yet (the Astra system has yet to come online), this is quite a show of confidence for an unproven HPC technology.

As we’ve alluded to before, the run-up to exascale appears to be fostering the end of x86 hegemony in HPC. Such a development is being driven by the need for more customized hardware for supercomputers and by national and regional desires to produce the most critical pieces of these systems domestically. It remains to be seen to what degree all of this will usher in a new HPC landscape, but as these prototypes roll out, we’re getting a much better idea of the shape of things of to come.