China Extends Lead in Number of TOP500 Supercomputers, US Holds on to Performance Advantage

BERKELEY, Calif.; FRANKFURT, Germany; and KNOXVILLE, Tenn.— The 54th edition of the TOP500 saw China and the US maintaining their dominance of the list, albeit in different categories. Meanwhile, the aggregate performance of the 500 systems, based on the High Performance Linpack (HPL) benchmark, continues to rise and now sits at 1.65 exaflops. The entry level to the list has risen to 1.14 petaflops, up from 1.02 petaflops in the previous list in June 2019.

In this video from the DDN booth at SC19, Scot Schultz from Mellanox presents: Connecting Visions: HDR 200GB/sec InfiniBand. "HDR 200Gb/s InfiniBand accelerates 31 percent of new InfiniBand-based systems on the current TOP500, including the fastest TOP500 supercomputer built this year. The results also highlight InfiniBand’s continued position in the top three supercomputers in the world and acceleration of six of the top 10 systems. Since the TOP500 List release in June 2019, InfiniBand’s presence has increased by 12 percent, now accelerating 141 supercomputers on the List."

Job of the Week: Head of Research Computing at the Norwich Biosciences Institute The Norwich Biosciences Institute Partnership (NBIP) is seeking a new Head of Research Computing in our Job of the Week. "We have an exciting opportunity for a strategic High-Performance Computing (HPC) leader to take accountability for the future development of research computing across one of the UK’s foremost research organisations. The Head of Research Computing will set the future technology strategy and service model for mission-critical research IT services at NBI."

The post Job of the Week: Head of Research Computing at the Norwich Biosciences Institute appeared first on insideHPC.

GRENOBLE, France, Jan. 17, 2020 — Kalray, a pioneer in processors for new intelligent systems, today announced that the Board of Directors of the company has appointed Erwan Menard, among the world’s leading experts in Storage for Cloud and Enterprise businesses, as an independent Board Member. Erwan, 46, based in California-USA, provides the company with […]

The post Erwan Menard, Director of Infrastructure and Applications Modernization Solutions at Google Cloud, Joins Kalray Board of Directors appeared first on HPCwire.

MOUNTAIN VIEW, Calif., Jan. 17, 2020 — Groq, the inventor of the Tensor Streaming Processor (TSP) architecture and a new class of compute, today announced that Groq hardware is now available on the Nimbix Cloud for select Groq partners. The Groq processing architecture is designed specifically for the performance requirements of computer vision, machine learning and other […]

Cache Is King was written by Timothy Prickett Morgan at The Next Platform.

HPC In 2020: Acquisitions And Mergers As The New Normal

After a decade of vendor consolidation that saw some of the world’s biggest IT firms acquire first-class HPC providers such as SGI, Cray, and Sun Microsystems, as well as smaller players like Penguin Computing, WhamCloud, Appro, and Isilon, it is natural to wonder who is next. …

HPC In 2020: Acquisitions And Mergers As The New Normal was written by Michael Feldman at The Next Platform.

In December 2020, CIUK will feature the inaugural CIUK Student Cluster Challenge. Teams of six students will compete to build a working HPC cluster and run a set of benchmark codes for both simulations and AI workflows. Based on the CIUK competition, a CIUK team will be identified to compete in the International Supercomputing Student Cluster Challenge in Frankfurt in June 2021. Both undergraduate and graduate students are eligible to participate. Regional Cluster challenges will be organised to help teams prepare for the CIUK event. .

With an unprecedented level of industry participation, including a thriving exhibition and record levels of sponsorship, the 2020 HiPEAC conference in Bologna on 20-22 January will showcase the innovative made-in-Europe technologies driving computing systems from the edge to the Cloud. This year, the conference will dive into radical new developments in European processor technology, including open source hardware, while building on HiPEAC's long-established reputation for cutting-edge research into heterogeneous architectures, cross-cutting artificial intelligence themes, security and more. .

Since June 2019 only Petaflop systems have been able to make the list. The total aggregate performance of all 500 system has now risen to 1.65 Exaflops.

The share of installations in China continues to rise strongly. 45.6 % of all system are now listed as being installed in China. The share of system listed in the USA remains near it's all time low at 23.4 %. However, systems in the USA are on average larger, which allowed the USA (37.1%) to stay close to China (32.3%) in terms of installed performance.

There were no changes to the top of the list at all. The first new system shows up only at position 24! It is an IBM Power based system utilizing NVidia Volta GV100 which allowed it to capture the No 3 spot on the Green500 list. 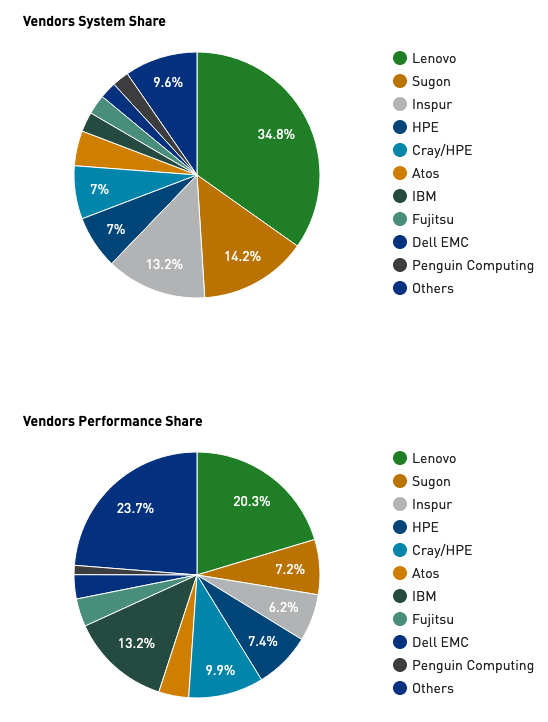 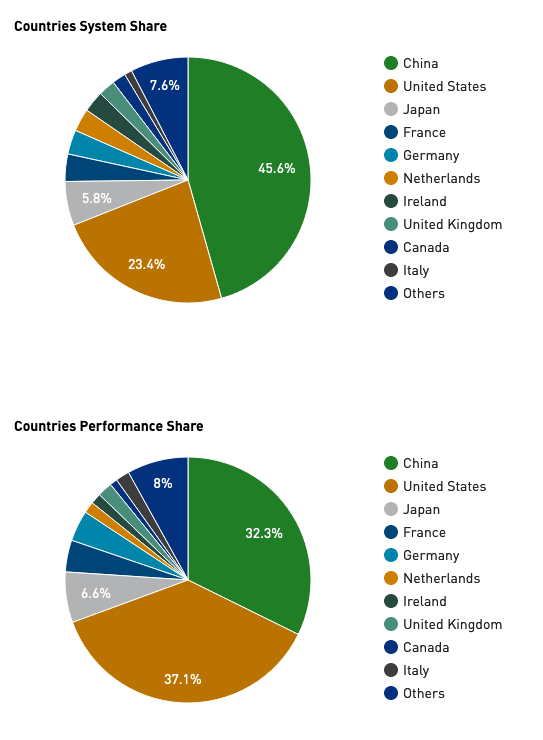