A slide from what appears to be an Intel presentation delivered in China illustrates the company’s roadmap for its Xeon Scalable Processor, Omni-Path fabric, and HPC server chip line.

The slide was apparently drawn from a document picked up by Anandtech, which reported that the presentation was published by the Central South University from Changsha City, Hunan, along with a number of other slide decks associated with a local server/HPC event. The Intel document has since disappeared from the site. 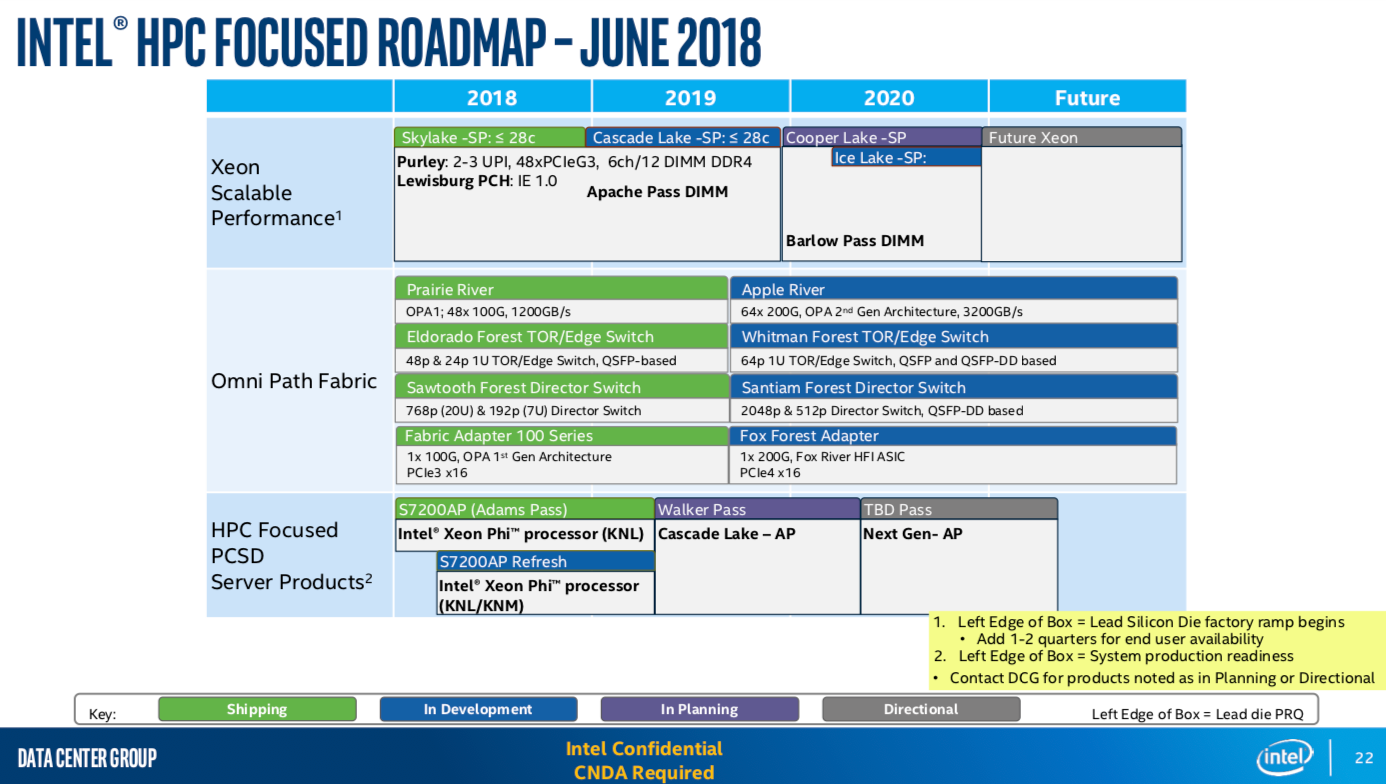 If the roadmap is accurate, Intel has certainly been busy rejiggering its server roadmap, especially with regard to its HPC portfolio. As can be seen from the slide above, it looks like the Xeon Phi line will be discontinued, or at the very least rebranded, replaced by a new product with an AP designation. The first one will be called Cascade Lake-AP, which will be in production in the first half of 2019. Its unnamed successor will be available in 2020. The latter processor would be a likely candidate to power Argonne National Lab’s Aurora supercomputer, the first exascale system to be deployed in the US.

The roadmap also suggests Intel will stop producing its “Knights Landing” and “Knights Mill” Xeon Phi products in 2019, which is at least partially corroborated by a Product Change Notification document Intel published on July 23. That notification specifies that the Knights Landing products won’t be available for order after August 31, 2018 and will stop shipping on July 19, 2019.

Turning to the Xeon product line, the roadmap shows three upcoming products. As expected, the Cascade Lake-SP product set will replace the current Skylake-SP processors in 2019. As we recently reported, the Cascade Lake Xeons will be manufactured on a 14nm process because of repeated delays with Intel’s 10nm technology. New to the roadmap is Cooper Lake-SP, which will appear in late 2019/early 2020 as the Cascade Lake-SP replacement. What’s curious here is that the planned Ice Lake-SP looks like it will be available in parallel with the Cooper Lake chip in the latter half of 2020. Since Ice Lake is supposed to encapsulate a new microarchitecture and be manufactured on the 10nm process, it’s possible that Cooper Lake will either be a 14nm version of the new microarchitecture or a 10nm version of the old microarchitecture – or something else entirely.

The Cascade Lake-SP will support the Apache Pass DIMMs, the codename for the recently-announced Optane persistent memory DIMMs based on 3D XPoint memory. The Anandtech report speculates the Barlow Pass DIMMs that will be supported by the subsequent Cooper Lake-SP and Ice Lake-SP processors correspond to second-generation Optane memory products, which seems plausible.

The slide also reveals a few new details about Intel’s second-generation Omni-Path fabric, which will support 200 Gbps server-to-server interconnectivity. To start with, Intel plans to offer a 64-port top-of-rack switch, as well as a 2048-port director switch for the new Omni-Path. The host channel adapter will require a 16-lane slot using PCIe Gen4, which is the same setup required by Mellanox’s HDR (200 Gbps) InfiniBand adapter. According to the roadmap, the second-generation Omni-Path products will debut in late 2019.

Since this isn’t an official document, these plans could be reshuffled before any of these new products are launched.  But since much of the roadmap corresponds to other hints Intel has dropped regarding its datacenter portfolio, this would appear to be a pretty accurate reflection of what the chipmaker has on tap for 2019 and 2020. As always, stay tuned.