At the Hot Chips conference this week, Intel provided a few more details on Cascade Lake, the upcoming Xeon Scalable Processor that is scheduled to start shipping before the end of the year. 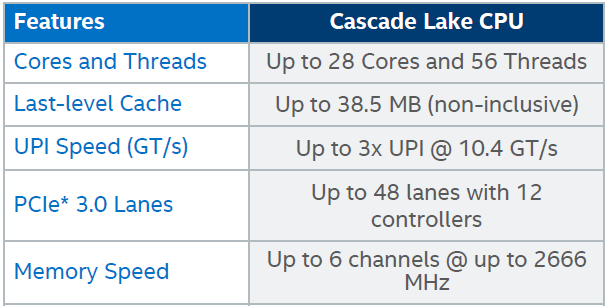 As expected, the next-generation Xeon will offer much the same basic functionality as the current Skylake processors, which makes sense since it’s based on the same microarchitecture.  Specifically, Cascade Lake will offer up to 28 cores, a six-channel memory interface, 48 lanes of PCIe 3.0, and a last-level cache capacity of 1.375 MB per core – exactly the same as Skylake. Also, like Skylake, it will be built on the 14nm process.

Floating point performance is likely to be identical as well, given that each Cascade Lake AVX-512 unit will deliver the same 16 double precision flops per cycle. Intel did, however, say they have done some “process tuning” for the new chip that will provide “targeted performance improvement.”

As a result, if you already have Skylake CPUs, there doesn’t seem to be much incentive to move up to the new processor. However, Cascade Lake does include a bunch of additional capabilities that could provide incentives to upgrade.  Intel already outlined these new features earlier this month at its Data-Centric Innovation Summit. To recap, the new feature set includes:

For the VNNI capability, Intel is promising a significant performance boost for inferencing neural networks – up to 14x in some cases, compared to the Skylake silicon. Note that some of this extra performance is a result of software optimizations to DL frameworks, rather than hardware, but in the AI world, these things tend to go hand in hand.

Regarding the Optane DIMM support, the Hot Chips event gave Intel an opportunity to offer some additional information about what all this entails.  To start with, although the Optane modules are hardware-compatible with the DDR4 memory interface, it’s not simply a matter of plugging the DIMMs into existing slots. Intel has added proprietary protocol extensions in the Cascade Lake memory controller to support the new memory modules, allowing DRAM and 3D XPoint to cohabitate in the server.

To take advantage of the greater memory capacity afforded by the Optane hardware, Cascade Lake can support more than 3 TB of memory per socket. (With Skylake, memory topped out at 1.5 TB.) More to the point those terabytes should cost you significantly less than the equivalent capacity in DRAM, which, of course, is one of Optane’s major selling features.

Getting up to 6 TB of memory in a single dual-socket server at a reasonable price is a potential game-changer for the datacenter, which are increasingly used to run memory-hungry applications like big data analytics, AI, and scientific simulations. Subsequent generations of Optane DIMMs and Xeon processors will likely expand capacities even further.

The devil will be in the details, however, and will depend upon how well these new memory modules perform in real servers, as well as how easy it is for applications to tap into that performance. Intel has conveniently provided a Persistent Memory Development Kit (PMDK) to help that along, which it wisely released as open source software. Intel is also claiming that PMDK is product neutral, which theoretically should make it compatible with any 3D XPoint modules developed by Micron or even non-volatile DIMMs based on other memory technologies.

Given that both the hardware and software behind Optane and the deep learning optimizations are rather new, it’s not fair to expect miracles with Cascade Lake. There’s bound to be some heavy lifting involved as developers upgrade their application code to take advantage of Optane’s additional capacity and non-volatility and the new VNNI instructions. Nonetheless, the humble Cascade Lake processor could turn out to be a critical product for Intel as it figures out ways to differentiate itself in a more crowded and fragmented server chip market.