When the 40th edition of the list was released at the start of SC12, the No. 1 position was claimed by Titan, a 560,640 processor system with a Linpack performance of 17.6 petaflop/s. Oak Ridge National Laboratory's Titan is a Cray XK7 system that relies on a combination of GPUs and traditional CPUs to make it the world's most powerful supercomputer. Each of Titan's 18,688 nodes contains an NVIDIA Tesla K20 GPU along with a 16-core AMD Opteron 6274 CPU processor, giving the system a peak performance of more than 27 petaflops. Titan also has more than 700 terabytes of memory.

Titan's use of GPUs also points the way for future scientific supercomputers. Because GPUs provide high-performance and energy-efficient computing power, they will allow supercomputing systems to become ever more powerful while avoiding the obstacles inherent in growing size and power consumption.

Research teams have been preparing for Titan for two years, optimizing their codes to take advantage of the GPUs. Early projects on Titan include simulations of the magnetic properties of materials, turbulent combustion in an internal combustion engine, neutron transport in a nuclear power reactor, and long-term climate change. 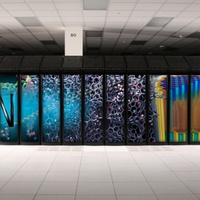 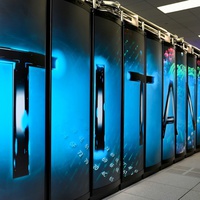 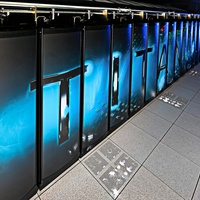