The Earth Simulator supercomputer at the Earth Simulator Center in yokohama, Japan, took the No. 1 spot in June 2002 with a performance of 35.86 Tflop/s (trillions of calculations per second) running the Linpack benchmark – almost five times higher than the performance of the IBM ASCI White system that had stood at the top of the previous three lists. This powerful leapfrogging to the top by a system so much faster than the previous top system is unparalleled in the history of the TOP500. The performance gap also kept the Earth System at No. 1 for five consecutive lists.

The Earth Simulator was a highly parallel vector supercomputer for running global climate models
to evaluate the effects of global warming and problems in solid earth geophysics. The system was developed for Japan Aerospace Exploration Agency, Japan Atomic Energy Research Institute, and Japan Marine Science and Technology Center (JAMSTEC) in 1997. Construction started in October 1999, and the site officially opened on March 11, 2002. The project cost 60 billion yen.

Built by NEC, the Earth Simulator was based on their SX-6 architecture. It consisted of 640 nodes with eight vector processors and 16 gigabytes of memory at each node, for a total of 5120 processors and 10 terabytes of memory. Two nodes were installed per 1 meter x 1.4 meter x 2 meter cabinet. Each cabinet consumed 20 kW of power. The system had 700 terabytes of disk storage (450 for the system and 250 for the users) and 1.6 petabytes of mass storage in tape drives. It was able to run holistic simulations of global climate in both the atmosphere and the oceans down to a resolution of 10 km. 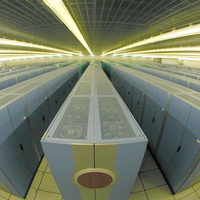