When the second list of the top500 supercomputers was presented at the 1993 Supercomputing Conference, it featured a new No. 1 system: the Numerical Wind Tunnel at the National Aerospace Laboratory of Japan. The Numerical Wind Tunnel was an early implementation of the vector parallel architecture developed in a joint project between the National Aerospace Laboratory of Japan and Fujitsu. The first deployment featured 140 vector processors and achieved 124.2 gigaflop/s performance running the Linpack benchmark.

The system lost the No. 1 spot in June 1994, but with an upgrade to 167 processors, the Numerical Wind Tunnel reclaimed the top spot with a Linpack performance of 170 gigaflop/s and remained atop the list until December 1995.It was the first supercomputer with a sustained performance of close to 100 Gflop/s for a wide range of fluid dynamics application programs. The system’s vector processors featured a gate delay of as low as 60 ps in the Ga-As chips.

The resulting cycle time was 9.5 ns. The processor had four independent pipelines each capable of executing two Multiply-Add instructions in parallel resulting in a peak speed of 1.7 Gflop/s per processor. Each processor board was equipped with 256 Megabytes of central memory. 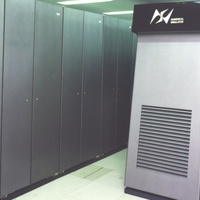