In November 2004, the DOE/IBM BlueGene/L beta system was able to claim the No. 1 position with its record Linpack benchmark performance of 70.72 teraflop/s. This system was assembled and tested at the IBM Rochester site. Once completed, the machine was moved to Lawrence Livermore National Laboratory in Livermore, Calif. In what became a familiar pattern, BlueGene/L was upgraded three times, keeping it atop seven consecutive lists.

When the November 2007 list was issued, BlueGene/L was still on top, having been significantly expanded to achieve a Linpack benchmark performance of 478.2 TFop/s. But after having the lead for seven consecutive lists, BlueGene/L’s reign as No. 1 was coming to an end. 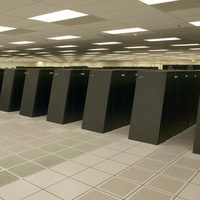