The IBM ASCI White system located at Lawrence Livermore National Laboratory took the No. 1 position in November 2000 with 4.9 teraflop/s Linpack performance. This system was built with 512 nodes, each of which contained 16 IBM Power3 processors using a shared memory. This type of hierarchical architecture was becoming more and more common for systems used in HPC.

By June 2001, Linpack performance on ASCI White had improved to 7.2 teraflop/s, keeping it in the No. 1 position for two more lists.

Located in a classified area at Lawrence Livermore National Laboratory, ASCI White was housed in over two hundred cabinets and covered a space the size of two basketball courts and weighed 106 tons. It contained six trillion bytes (TB) of memory and had more than 160 TB of IBM TotalStorage 7133 Serial Disk System capacity. 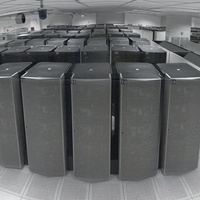