Intel’s ASCI Red supercomputer was the first teraflop/s computer, taking the No.1 spot on the 9th TOP500 list in June 1997 with a Linpack performance of 1.068 teraflop/s.

Intel’s ASCI Red marked the beginning of a new supercomputer era. In the mid-90s when vector computers started to become less important, The U.S. Department of Energy’s ASCI (Accelerated Strategic Computing Initiative) program, which focused on defense applications, opened up a completely new source of funds. ASCI Red was the first product of this initiative and laid the foundation for the U.S. dominance in the production and implementation of supercomputers. ASCI Red was also a remarkable supercomputer from a technical point of view:

It was a mesh-based (38 X 32 X 2) MIMD massively parallel machine initially consisting of 7,264 compute nodes, 1,212 gigabytes of total distributed memory and 12.5 terabytes of disk storage. The original incarnation of this machine used Intel Pentium Pro processors, each clocked at 200 MHz. These were later upgraded to Pentium II OverDrive processors. The system was upgraded to a total of 9,632 Pentium II Over-Drive processors, each clocked at 333 MHz.

It consisted of 104 cabinets, taking up about 2,500 square feet (230 m2). The system was designed to use commodity mass-market components and to be very scalable.

ASCI Red was retired from service in September 2005, after having been on 17 TOP500 lists over eight years. It was the fastest computer on the TOP500 list from June 1997 to June 2000 and was replaced as the number one by IBM’s ASCI White at Lawrence Livermore National Laboratory on the November 2000 list. 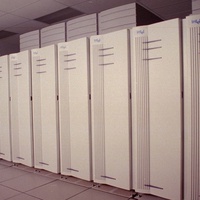