FRANKFURT, Germany; BERKELEY, Calif.; and KNOXVILLE, Tenn.—The TOP500 celebrates its 25th anniversary with a major shakeup at the top of the list. For the first time since November 2012, the US claims the most powerful supercomputer in the world, leading a significant turnover in which four of the five top systems were either new or substantially upgraded. 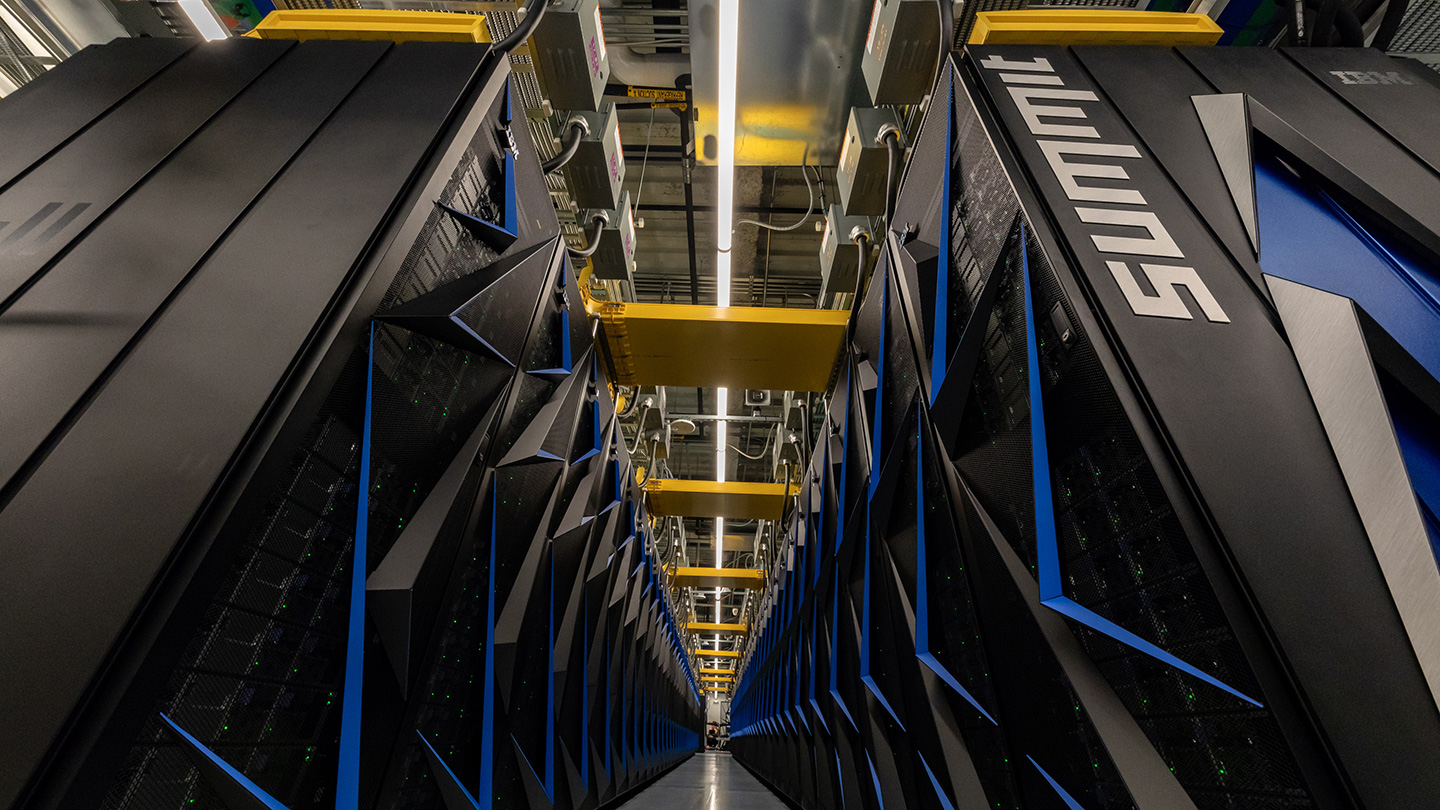 Summit, an IBM-built supercomputer now running at the Department of Energy’s (DOE) Oak Ridge National Laboratory (ORNL), captured the number one spot with a performance of 122.3 petaflops on High Performance Linpack (HPL), the benchmark used to rank the TOP500 list. Summit has 4,356 nodes, each one equipped with two 22-core Power9 CPUs, and six NVIDIA Tesla V100 GPUs. The nodes are linked together with a Mellanox dual-rail EDR InfiniBand network.

Sunway TaihuLight, a system developed by China’s National Research Center of Parallel Computer Engineering & Technology (NRCPC) and installed at the National Supercomputing Center in Wuxi, drops to number two after leading the list for the past two years. Its HPL mark of 93 petaflops has remained unchanged since it came online in June 2016.

Sierra, a new system at the DOE’s Lawrence Livermore National Laboratory took the number three spot, delivering 71.6 petaflops on HPL. Built by IBM, Sierra’s architecture is quite similar to that of Summit, with each of its 4,320 nodes powered by two Power9 CPUs plus four NVIDIA Tesla V100 GPUs and using the same Mellanox EDR InfiniBand as the system interconnect.

Tianhe-2A, also known as Milky Way-2A, moved down two notches into the number four spot, despite receiving a major upgrade that replaced its five-year-old Xeon Phi accelerators with custom-built Matrix-2000 coprocessors. The new hardware increased the system’s HPL performance from 33.9 petaflops to 61.4 petaflops, while bumping up its power consumption by less than four percent. Tianhe-2A was developed by China’s National University of Defense Technology (NUDT) and is installed at the National Supercomputer Center in Guangzhou, China.

The new AI Bridging Cloud Infrastructure (ABCI) is the fifth-ranked system on the list, with an HPL mark of 19.9 petaflops. The Fujitsu-built supercomputer is powered by 20-core Xeon Gold processors along with NVIDIA Tesla V100 GPUs. It’s installed in Japan at the National Institute of Advanced Industrial Science and Technology (AIST).

Despite the ascendance of the US at the top of the rankings, the country now claims only 124 systems on the list, a new low. Just six months ago, the US had 145 systems. Meanwhile, China improved its representation to 206 total systems, compared to 202 on the last list. However, thanks mainly to Summit and Sierra, the US did manage to take the lead back from China in the performance category. Systems installed in the US now contribute 38.2 percent of the aggregate installed performance, with China in second place with 29.1 percent. These numbers are a reversal compared to six months ago.

The next most prominent countries are Japan, with 36 systems, the United Kingdom, with 22 systems, Germany with 21 systems, and France, with 18 systems. These numbers are nearly the same as they were on the previous list.

For the first time, total performance of all 500 systems exceeds one exaflop, 1.22 exaflops to be exact. That’s up from 845 petaflops in the November 2017 list. As impressive as that sounds, the increase in installed performance is well below the previous long-term trend we had seen until 2013.

The overall increase in installed capacity is also reflected in the fact that there are now 273 systems with HPL performance greater than one petaflop, up from 181 systems on the previous list. The entry level to the list is now 716 teraflops, an increase of 168 teraflops.

Accelerators are used in 110 TOP500 systems, a slight increase from the 101 accelerated systems in the November 2017 lists. NVIDIA GPUs are present in 98 of these systems, including five of the top 10: Summit, Sierra, ABCI, Piz Daint, and Titan. Seven systems are equipped with Xeon Phi coprocessors; PEZY accelerators are used in four systems; and the Matrix-2000 coprocessor is used in a single machine, the upgraded Tianhe-2A. An additional 20 systems use Xeon Phi as the main processing unit.

Almost all the supercomputers on the list (97.8 percent) are powered by main processors with eight or more cores and more than half (53.2 percent) have over 16 cores.

Ethernet, 10G or faster, is now used in 247 systems, up from 228 six months ago. InfiniBand is found on 139 systems, down from 163 on the previous list. Intel’s Omni-Path technology is in 38 systems, slightly up from 35 six months ago.

For the first time, the leading HPC manufacturer of supercomputers on the list is not from the US. Chinese-based Lenovo took the lead with 23.8 percent (122 systems) of all installed machines, followed by HPE with 15.8 percent (79 systems), Inspur with 13.6 percent (68 systems), Cray with 11.2 percent (56 systems), and Sugon with 11 percent (55 systems). Of these, only Lenovo, Inspur, and Sugon captured additional system share compared to half a year ago.

Even though IBM has two of the top three supercomputers in Summit and Sierra, it claims just 19 systems on the entire list. However, thanks to those two machines, the company now contributes 19.9 percent of all TOP500 performance. Trailing IBM is Cray, with 16.5 percent of performance, Lenovo with 12.0 percent, and HPE with 9.9 percent.

Intel processors are used in 476 systems, which is marginally higher than the 471 systems on the last list. IBM Power processors are now in 13 systems, down from 14 systems since November 2017.

The top three positions in the Green500 are all taken by supercomputers installed in Japan that are based on the ZettaScaler-2.2 architecture using PEZY-SC2 accelerators, while all other system in the top 10 use NVIDIA GPUs.

The most energy-efficient supercomputer is once again the Shoubu system B, a ZettaScaler-2.2 system installed at the Advanced Center for Computing and Communication, RIKEN, Japan. It was remeasured and achieved 18.4 gigaflops/watt during its 858 teraflops Linpack performance run. It is ranked number 362 in the TOP500 list.

The second-most energy-efficient system is Suiren2 system at the High Energy Accelerator Research Organization/KEK, Japan. This ZettaScaler-2.2 system achieved 16.8 gigaflops/watt and is listed at position 421 in the TOP500. Number three on the Green500 is the Sakura system, which is installed at PEZY Computing. It achieved 16.7 gigaflops/watt and occupies position 388 on the TOP500 list.

They are followed by the DGX SaturnV Volta system in the US; Summit in the US; the TSUBAME 3.0 system, AIST AI Cloud system, the AI Bridging Cloud Infrastructure (ABCI) system, all from Japan; the new IBM MareNostrum P9 cluster in Spain;  the DOE’s Summit system; and Wilkes-2, from the UK. All of these systems use various NVIDIA GPUs.

The most energy-efficient supercomputer that doesn’t rely on accelerators of any kind is the Sunway TaihuLight, which is powered exclusively by ShenWei processors. Its 6.05 gigaflops/watt earned it 22nd place on the Green500 list.

The TOP500 list has incorporated the High-Performance Conjugate Gradient (HPCG) Benchmark results, which provided an alternative metric for assessing supercomputer performance and is meant to complement the HPL measurement.

The two new DOE systems, Summit at ORNL and Sierra at LLNL, captured the first two positions on the latest HPCG rankings. Summit achieved 2.93 HPCG-petaflops and Sierra delivered 1.80 HPCG-petaflops. They are followed by the previous leader, Fujitsu’s K computer, which attained 0.60 HPCG-petaflops. Trinity, a Cray XC40 system installed at Los Alamos National Lab and Piz Daint, a Cray XC50 system installed at the Swiss National Supercomputing Centre (CSCS) round out the top five.

The first version of what became today’s TOP500 list started as an exercise for a small conference in Germany in June 1993. Out of curiosity, the authors decided to revisit the list in November 1993 to see how things had changed. About that time, they realized they might be onto something and decided to continue compiling the list, which is now a much-anticipated, much-watched and much-debated twice-yearly event.