Leaders of some of the largest technology companies in the world spoke out against the Trump administration’s executive order to bar the entry of individuals from seven countries into the US. The order signed last Friday would temporarily prevent citizens from Iran, Iraq, Syria, Yemen, Sudan, Somalia and Libya from entering the country whether or not they had the requisite documentation. 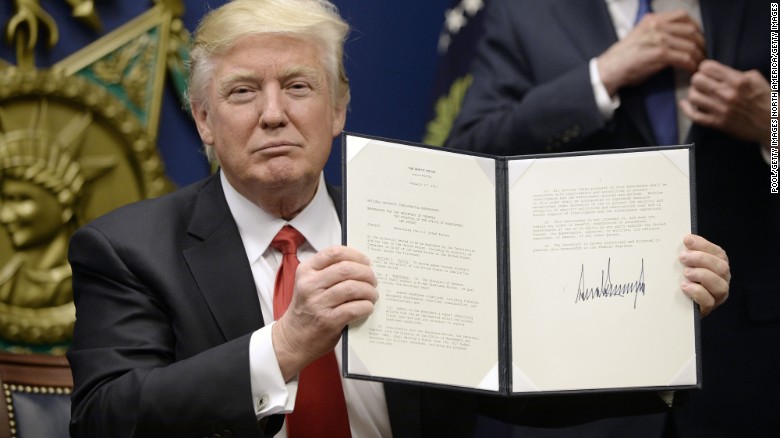 Over the weekend, an unspecified number of visa and green card holders were prevented from getting on flights to the US while overseas, while others were detained at airports once they arrived. The travel ban is supposed to last 90 days, after which it will be re-evaluated. The ban on refugees and other immigrants extends to 120 days, although for Syria, it will remain in effect indefinitely.

The executive order was ostensibly designed to safeguard the US from individuals who might carry out terrorist attacks. But the immediate effect has been to separate families, strand foreign students and researchers, and disrupt businesses plans. As a result, the executive action came under immediate attack by politicians, civil libertarians, and other advocacy groups. It has also generated a backlash by many US business leaders, but none more so than those in the tech sector.

Silicon Valley companies and other US-based technology firms prides themselves on their international makeup, and have come to rely on this diversity to compete in the global marketplace. The IT sector is heavily dependent on the H-1B visa program, which companies use to hire about 65,000 foreign workers per year. While campaigning, Trump spoke out against the program, a stance which earned him the enmity of movers and shakers in country’s IT community.

As Politico reported over the weekend, the order to restrict travel “left tech giants like Apple, Facebook, Google and Microsoft scrambling on Saturday to safeguard their employees and register their opposition with the White House.”

In an email to Apple employees, CEO Tim Cook bluntly stated it is “not a policy we support.” He wrote that employees who are citizens of the affected countries are being supported by the company’s HR, legal and security teams and he has reached out to the White House to “explain the negative effect on our coworkers and our company.” Cook also reminded his employees that Apple wouldn’t exist without immigration, alluding to the Syrian heritage of Steve Jobs, the company’s founder.

Facebook CEO Mark Zuckerberg posted his reservations about the Trump’s order. “Like many of you, I'm concerned about the impact of the recent executive orders signed by President Trump,” he wrote. “We need to keep this country safe, but we should do that by focusing on people who actually pose a threat.” In the past, Zuckerberg has criticized Trump’s plan to build a wall along the Mexican border.

Google, which employs close to 200 workers who could be impacted by the executive order, has been among the most the most vocal in opposition to the ban. In an internal memo obtained by Bloomberg, Indian-born Google CEO Sundar Pichai wrote that it’s “painful to see the personal cost of this executive order on our colleagues." Google cofounder Sergy Brin, a citizen of the Soviet Union who immigrated to the US with his family during the Cold War, addressed an employee-led rally on Monday to offer support. "So many people were obviously outraged by this order, as am I myself, being an immigrant and a refugee," Brin told the crowd. On Monday, Google set up a $4 million emergency fund to help its affected employees with legal support and other expenses. 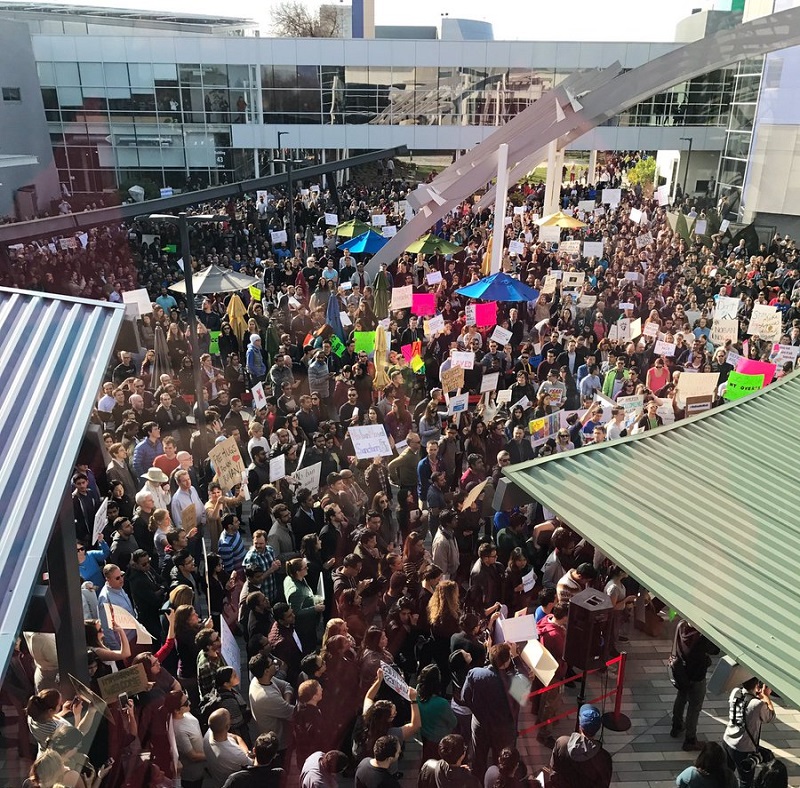 In a more pointed criticism, Expedia CEO Dara Khosrowshahi, characterized Trump’s action as short-sited. “I believe that with this Executive Order, our President has reverted to the short game,” he wrote in an email to his employees. “The U.S. may be an ever so slightly less dangerous as a place to live, but it will certainly be seen as a smaller nation, one that is inward-looking versus forward thinking, reactionary versus visionary.” Khosrowshahi immigrated to the US from Iran following the revolution of 1978.

Expedia has joined Microsoft and Amazon in supporting a lawsuit filed by the state of Washington challenging the ban. Like the other tech companies mentioned here, all three have pledged legal and financial support for their employees that could be barred from entering the US under the order’s restrictions. Amazon CEO Jeff Bezos has also said he has reached out to both Democratic and Republican congressional leaders to explore other legislative options.

Other tech companies speaking out against the travel and immigration ban include Intel, Twitter, Netflix, Lyft, Uber, Airbnb, Dropbox, and GitHub, among others. Industry consortiums and advocacy groups have weighed in as well. The Association for Computing Machinery (ACM), the American Association for the Advancement of Science (AAAS), the Computer & Communications Industry Association (CCIA), the Consumer Technology Association (CTA), and Tech:NYC have all issued public statements reflecting their objections and concerns.

According to a Fox News report, scientists are warning of the dangers this policy to America’s technology leadership, not to mention its moral standing. From the article:

“Thousands of scientists — including 40 Nobel laureates — have added their names to a statement powerfully denouncing President Trump’s executive order restricting entry to the United States for people from seven nations. Calling the order ‘discriminatory,’ and “’detrimental to the national interests of the United States,’ the petition explains that not only does the immigration move ‘unfairly’ target people from Muslim-majority nations, it also harms American science.”

Still to be heard from in any substantial way are the big server makers like IBM, HPE, and Dell, who appear to be treading more carefully than their hyperscale brethren. Unlike them, server vendors are subject greater government scrutiny due to the federal contracts that underlies large parts of their businesses.

Other organizations are devising responses and strategies in real time as legal challenges are brought to bear. As of this writing, four federal courts have ruled against a number of provisions in the executive order, including deportations based on the ban, although compliance by US custom agents has been uneven so far.

The current crisis regarding the travel ban is apt to work itself out to some extent. Homeland Security has already issued a waiver that allows those holding green cards or with permanent residence in the US to enter the country as before. The immigration restrictions will be harder remove, since those legal challenges will be more complex. The disposition of some of the provisions may take years to work their way through the courts.