TOP500 List Refreshed, US Edged Out of Third Place 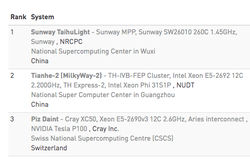 FRANKFURT, Germany; BERKELEY, Calif.; and KNOXVILLE, Tenn.— The 49th edition of the TOP500 list was released today in conjunction with the opening session of the ISC High Performance conference, which is taking place this week in Frankfurt, Germany. The list ranks the world’s most powerful supercomputers based on the Linpack benchmark and is released twice per year.

In the latest rankings, the Sunway TaihuLight, a system developed by China’s National Research Center of Parallel Computer Engineering & Technology (NRCPC) and installed at the National Supercomputing Center in Wuxi, maintains its top position. With a Linpack performance of 93 petaflops, TaihuLight is far and away the most powerful number-cruncher on the planet.

Tianhe-2, (Milky Way-2), a system developed by China’s National University of Defense Technology (NUDT) and deployed at the National Supercomputer Center in Guangzho, China, occupies the number two position with a Linpack mark of 33.9 petaflops.  Tianhe-2 was the number one system in the TOP500 list for three consecutive years, until TaihuLight eclipsed it in June 2016.

The new number three supercomputer is the upgraded Piz Daint, a Cray XC50 system installed at the Swiss National Supercomputing Centre (CSCS). The upgrade was accomplished with additional NVIDIA Tesla P100 GPUs, doubling the Linpack performance of the system’s previous mark of 9.8 petaflops in November 2016, which itself was the result of a significant upgrade. Piz Daint’s current Linpack result of 19.6 petaflops enabled the system to climb five positions in the rankings.

As a result of the Piz Daint upgrade, Titan, a Cray XK7 system installed at the Department of Energy’s (DOE) Oak Ridge National Laboratory, drops to number four in the rankings. Its Linpack mark of 17.6 petaflops has remained constant since it was installed in 2012.

Rounding out the top 10 are:

With the two Chinese supercomputers and one Swiss system occupying the top of the rankings, this is the second time in the 24-year history of the TOP500 list that the United States has failed to secure any of the top three positions. The only other time this occurred was in November 1996, when three Japanese systems captured the top three spots.

Nevertheless, the US still claims five of the top ten supercomputers, which is more than any other nation. It also leads the pack in the total number of TOP500 systems, with 169. China is a close second with 160. However, both countries lost share compared to six months ago, when they each claimed 171 systems. Besides the US and China, the most well-represented countries on the list are Japan, with 33 supercomputers, Germany, with 28, France, with 17, and the UK, with 17.

Aggregate performance on the TOP500 rose to 749 petaflops, a 32 percent jump from a year ago. Such an increase, though, is well below the list’s historical growth rate of approximately 185 percent per year. The slower growth in list performance is a trend that began in 2013, and has shown no signs of reversal.

Intel continues to be the dominant supplier of TOP500 chips. Either Xeon or Xeon Phi processors power 464 of the 500 systems. IBM Power processors are in 21 systems, while AMD Opteron CPUs are present in six systems. Processor share, with regard to supplier, has not changed appreciably over the last year.

A total of 91 systems on the list are now using accelerator/coprocessor technology, up slightly from 86 in November 2016. The most popular choices are NVIDIA GPUs, which are present in 74 systems, and Xeon Phi coprocessors, which are employed in 17 systems. (Three of those use a combination of NVIDIA GPUs and Xeon Phi coprocessors). Outliers include a single ATI Radeon-accelerated system and two that use PEZY technology. An additional 13 systems now use the Xeon Phi (Knights Landing) as the main processing unit.

For system interconnects, Ethernet and InfiniBand continue to be the most prevalent technologies. Ethernet is present in 207 systems; InfiniBand is present in 178. However, for the top 100 systems, their relative share changes dramatically, with Ethernet installed in just a single system, while InfiniBand is used in 42 of these elite machines. Intel Omni-Path interconnect technology, which made its first appearance a year ago with 8 supercomputers, is now installed in 38 systems.

In the system vendor arena, Hewlett Packard Enterprise (HPE) claims the most TOP500 systems, with 144. These include 25 systems originally installed by SGI, which HPE purchased in 2016. Lenovo is the second most popular vendor, with 88 systems, and Cray is in third place, with 57.

Energy efficiency on the list continues to rise, as reflected in the latest Green500 results. The top four positions are all occupied by newly installed systems in Japan, with the upgraded Piz Daint supercomputer capturing the number five spot. All of these use NVIDIA’s latest P100 GPUs. In fact, the top 13 systems on the latest Green500 are all equipped with the P100 hardware.

The most energy-efficient system on the Green500 list is the new TSUBAME 3.0, a modified HPE ICE XA system installed at the Tokyo Institute of Technology. It achieved 14.110 gigaflops/watt during its 1.998-petaflop Linpack performance run. It is ranked number 61 on the TOP500 list.

The number two Green500 entry is the kukai system at the Yahoo Japan Corporation. Built by Exascaler, this system achieves 14.045 gigaflops/watt, just 0.3 percent behind TSUBAME 3.0. It occupies position 466 on the current TOP500 list.

The number three system on the Green500 list is the AIST AI Cloud system at the National Institute of Advanced Industrial Science and Technology, Japan. This system from NEC achieves 12.68 gigaflops/watt and is ranked number 148 on the TOP500.

The number four Green500 system is the RAIDEN GPU system, manufactured by Fujitsu. It is installed at RIKEN’s Center for Advanced Intelligence Project. It attained 10.6 gigaflops/watt and is in position 306 on the TOP500 list.

Piz Daint, the fifth-ranked supercomputer on the Green500, conducted a power-optimized run of the Linpack benchmark, achieving 10.4 gigaflops/watt. At number three on the TOP500, it represents the most energy-efficient supercomputer in the top 50 of that list.

At 10:30 am CET on Monday, June 19, the TOP500 and Green500 awards will be handed out to the winning recipients. The award ceremony will be followed by a presentation from TOP500 author Erich Strohmaier, who will provide additional highlights of the list.

The first version of what became today’s TOP500 list started as an exercise for a small conference in Germany in June 1993. Out of curiosity, the authors decided to revisit the list in November 1993 to see how things had changed. About that time they realized they might be onto something and decided to continue compiling the list, which is now a much-anticipated, much-watched and much-debated twice-yearly event.