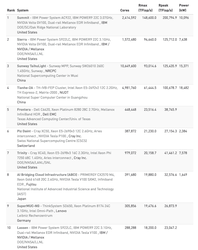 BERKELEY, Calif.; FRANKFURT, Germany; and KNOXVILLE, Tenn.— The 53rd edition of the TOP500 marks a milestone in the 26-year history of the list. For the first time, all 500 systems deliver a petaflop or more on the High Performance Linpack (HPL) benchmark, with the entry level to the list now at 1.022 petaflops.

The top of the list remains largely unchanged, with only two new entries in the top 10, one of which was an existing system that was upgraded with additional capacity.

Two IBM-built supercomputers, Summit and Sierra, installed at the Department of Energy’s Oak Ridge National Laboratory (ORNL) in Tennessee and Lawrence Livermore National Laboratory in California, respectively, retain the first two positions on the list. Both derive their computational power from Power 9 CPUs and NVIDIA V100 GPUs. The Summit system slightly improved its HPL result from six months ago, delivering a record 148.6 petaflops, while the number two Sierra system remains unchanged at 94.6 petaflops.

At number four is the Tianhe-2A (Milky Way-2A) supercomputer, developed by China’s National University of Defense Technology (NUDT) and deployed at the National Supercomputer Center in Guangzhou. It used a combination of Intel Xeon and Matrix-2000 processors to achieve an HPL result of 61.4 petaflops.

Frontera, the only new supercomputer in the top 10, attained its number five ranking by delivering 23.5 petaflops on HPL. The Dell C6420 system, powered by Intel Xeon Platinum 8280 processors, is installed at the Texas Advanced Computing Center of the University of Texas.

The AI Bridging Cloud Infrastructure (ABCI) is installed in Japan at the National Institute of Advanced Industrial Science and Technology (AIST) and is listed at number eight, delivering 19.9 petaflops. The Fujitsu-built system is equipped with Intel Xeon Gold processors and NVIDIA Tesla V100 GPUs.

SuperMUC-NG is in the number nine position with 19.5 petaflops. It’s installed at the Leibniz-Rechenzentrum (Leibniz Supercomputing Centre) in Garching, near Munich. The Lenovo-built machine is equipped with Intel Platinum Xeon processors, as well as the company’s Omni-Path interconnect.

The upgraded Lassen supercomputer captures the number 10 spot, with an upgrade that boosted its original 15.4 petaflops result on HPL to 18.2 petaflops. Installed at Lawrence Livermore National Laboratory, Lassen is the unclassified counterpart to the classified Sierra system and shares the same IBM Power9/NVIDIA V100 GPU architecture.

China leads by sheer numbers, US by performance

China’s dominance in system numbers is also reflected in vendor shares. Lenovo claims the greatest number of systems on the list, with 173, followed by Inspur with 71, and Sugon, with 63.  All three improved on their system share from six months ago.

HPE, with 40 systems, and Cray, with 39 systems, occupy fourth and fifth place, respectively. Bull, as the only European-based system vendor on the list, claims 21 systems, followed by Fujitsu, with 13, and IBM, with 12. However, since IBM is the vendor of Summit, Sierra, and a number of other large systems, the company’s aggregate TOP500 performance is 207 petaflops, a number only exceeded by Lenovo, with 14 times as many systems.

Intel and NVIDIA set the pace in silicon

From a processor perspective, Intel continues to dominate the TOP500 list, with the company’s chips appearing in 95.6 percent of all systems. IBM Power CPUs are in seven systems, followed by AMD processors, which are present in three systems. A single supercomputer on the list, Astra, is powered by Arm processors.

A total of 133 systems on the TOP500 list employ accelerator or coprocessor technology, down slightly from 138 six months ago. Of these, 125 systems use NVIDIA GPUs. About half of those (62) using the latest Volta-generation processors, with the remainder (60) based on Pascal and Kepler technology.

From an interconnect perspective, Ethernet continues to dominate the list overall, laying claim to 54.2 percent of TOP500 systems. InfiniBand is the second most popular interconnect, appearing in 25 percent of systems, followed by custom and proprietary interconnects at 10.8 percent, and Omni-Path at 9.8 percent.

However, when looking at the 50 fastest supercomputers on the list, those numbers change dramatically, with custom interconnects being used in 40 percent of the top systems, followed by InfiniBand at 38 percent, Omni-Path at 10 percent, and Ethernet at 2 percent (a single system).

The benchmark results for High-Performance Conjugate Gradient (HPCG) Benchmark were largely unchanged from last November, with the top five entries of Summit, Sierra, the K computer, Trinity, and the AI Bridging Cloud Infrastructure maintaining their previous rankings from November 2018. Summit and Sierra remain the only two systems to exceed a petaflop on the HPCG benchmark, delivering 2.9 petaflops and 1.8 petaflops, respectively. The average HPCG result on the current list is 213.3 teraflops, a marginal increase from 211.2 six months ago.

The first version of what became today’s TOP500 list started as an exercise for a small conference in Germany in June 1993. Out of curiosity, the authors decided to revisit the list in November 1993 to see how things had changed. About that time, they realized they might be onto something and decided to continue compiling the list, which is now a much-anticipated, much-watched, and much-debated twice-yearly event.

Shoubu system B, a ZettaScaler-2.2 system at the Advanced Center for Computing and Communication, RIKEN, Japan was decommissioned in March 2019. The Top500 team was not notified of this fact and following the TOP500 rules the system was removed from the lists.  This puts the DGX SaturnV Volta system, a NVIDIA system installed at NVIDIA, USA in the first spot of the Green500 list. It achieved 15.1 GFlops/Watt power efficiency. It is on position 469 in the TOP500.