The Anatomy of Winning Teams 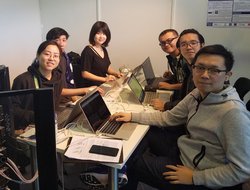 In the second installment of our two-part report on the Student Cluster Competition (SCC), we trace the history of the top three teams at the recent ISC High Performance conference (ISC18) and look at the factors that drove their success.

Congratulations to Team Tsinghua for winning first prize at ISC18! In a July 5, 2018 HPCwire feature, Dan Olds (Gabriel Consulting) interviewed all of the teams who competed this summer in Frankfurt. According to Olds, it was Tsinghua’s fifteenth major competition, which was a record among teams represented. Tsinghua has earned seven gold overall championships, two silver and two bronze medals. Olds attributed Tsinghua’s edge to their “maniacal dedication to tuning and power control.” 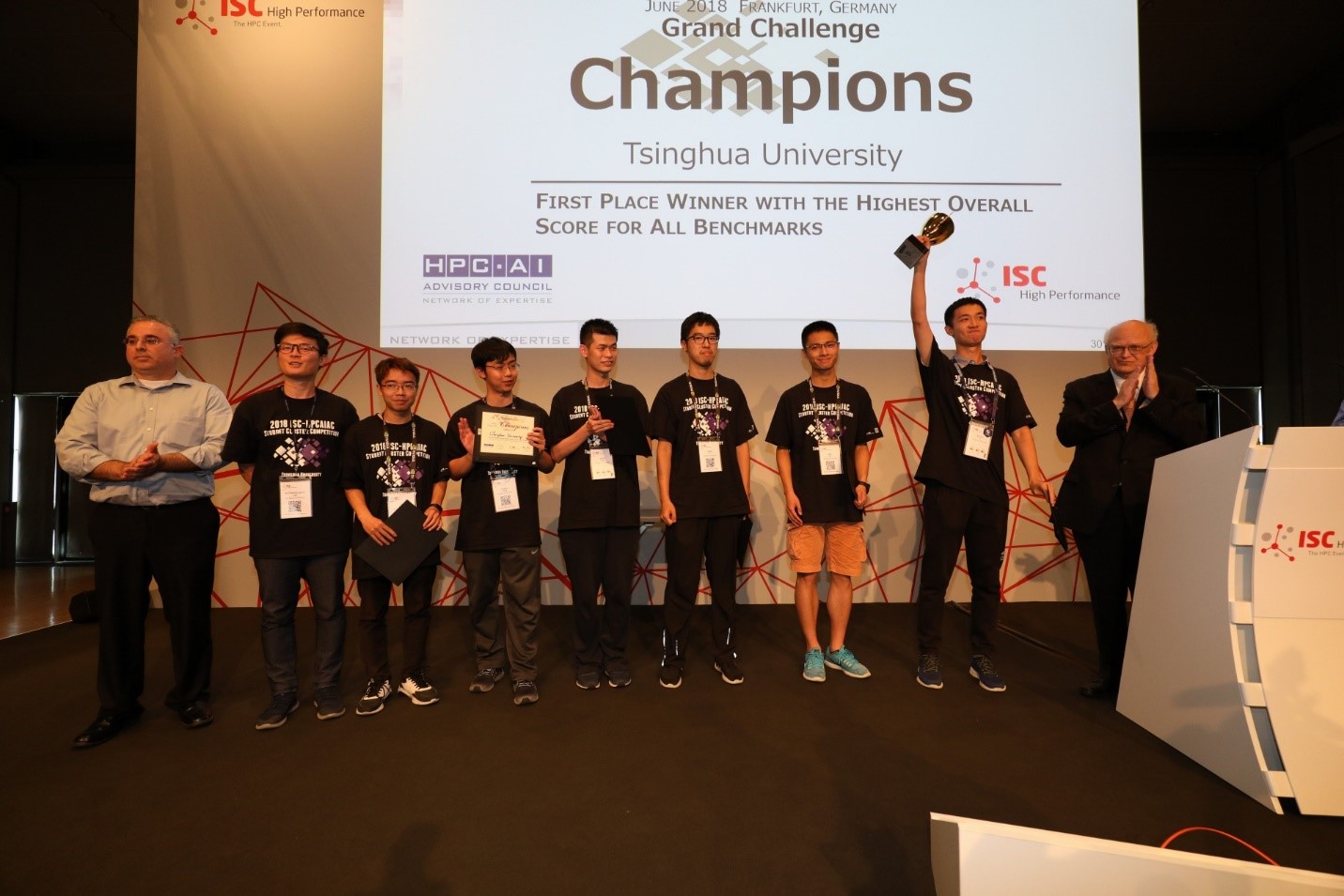 According to Tsinghua Team Captain Beichen Li, “Our participation is funded by our university, and we also receive support from industry vendors Inspur, Bitmain, Paratera, etc. with whom we have enjoyed long-term partnerships. Inspur supported our hardware for ASC and ISC this year. All of this support, and great logistical efforts, allow us to devote ourselves entirely to the competition instead of worrying about equipment or living expenses.”

Additionally, anecdotal evidence gathered from online features supports the notion that STEM excellence in China is both socially and financially rewarded. HPC human capacity development is a high priority for the government. Industries around the world rely on China’s skilled workforce; since they have established a reputation for excellence, high-achieving students are likely to benefit from more internships, training opportunities and jobs. Because they don’t carry much or any student debt, more can accept unpaid internships, which, in the US, are limited by US labor laws, but are more common in other countries.

Congratulations to Nanyang Technological University of Singaport for placing second at ISC18. They won gold at the SC17 competition as the overall champion and with the highest Linpack award, which as Dan Olds noted in this HPCwire articile, "is a rare feat."

According to Nanyang’s team leader, Ziji "Steven" Shi, their team has participated in nine major competitions to date – ASC14, ASC15, ASC16, ISC16, ISC17, ISC18, SC16, ISC17, and APAC AI-HPC 2018 (currently in progress). “ISC is a great learning experience,” added Shi. “After the competition in June, we learned a lot about optimizing, tuning and power control from some of the other teams. We also shared with them how we applied domain knowledge to guide the optimization on specific applications.” 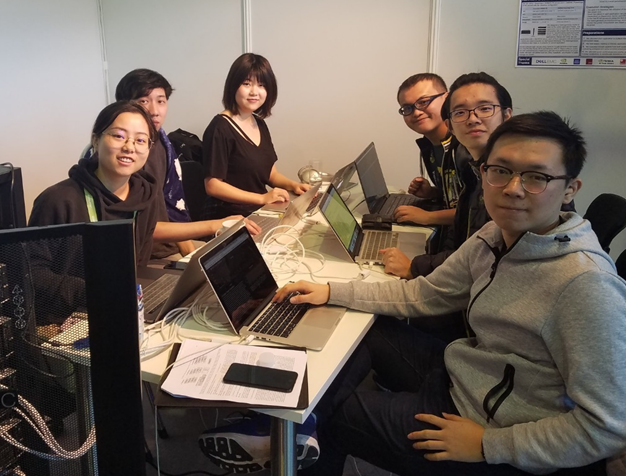 While ISC and SC do not offer financial awards, a cash prize is given at contests that Tsinghua and Nanyang have participated in, including AI-HPC and RDMA, which was first launched in October 2017.

Neither Tsinghua or Nanyang restrict the number of years that a student can participate in SCCs, and there seems to be an ample budget for travel. Therefore, it’s possible that each student might compete in as many as four competitions annually, for up to six years – or even more if they start in high school. This added exposure is a distinct advantage, and common among most winning teams.

When asked how they funded their participation in so many activities each year, not to mention the hardware, Ziji said, “Nanyang enjoys a good relationship with HPC industry sponsors, such as NVIDIA, Dell EMC and Mellanox. The Singapore Supercomputing Center and our university finance the team’s travel expenses, so our students can concentrate on training instead of fundraising.”

China and Singapore invest a considerable amount of money to train, and in some cases retrain, the STEM workforce and general citizenry to understand artificial intelligence (AI), master related technical skills, and develop software and hardware to support AI. For example, according to Director of AI Innovation Laurence Liew, who participated in the ISC18 Smart Cities panel, Singapore’s 100 Experiments project has allocated $25 million to develop solutions to 100 real-world AI industry problems over the next five years. Industries submit a problem statement, and an engineering team led by an AI researcher is tasked to oversee the development. There are currently 100 organizations that are in active discussions with AI Singapore, according to Liew, and 11 experiments have been approved and are underway. Parallel to the 100 Experiments project is the AI Apprenticeship Programme, which will train 200 apprentices to become AI engineers leveraging the experiments to provide the real-world challenge. This effort represents jobs that SCC contenders will benefit from in the future. Singapore has two additional programs that serve to inform general citizenry and non-technical professionals, so they will understand that AI, according to Liew, “isn’t here to take away their jobs.”

The South African team has placed in the top three at ISC since 2014. While it was just argued that added exposure from competing in multiple competitions over many years is a distinct advantage for some, that has not been a contributing factor to South Africa’s success. They choose an entirely new team each year, “so that as many students as possible are exposed, and diversity is achieved, including gender,” according to MacLeod. “Some learn to code just a few months before they first compete at the national competition in December,” he added. At that competition, a winning core team is selected – U-Witwatersrand prevails – and they choose two stellar alternates from underserved schools. Their achievements are outstanding given these self-limiting restrictions. For South Africa, winning isn’t as important as the opportunity to involve as many in the process as possible. But they still win and seem to have a lot of fun while they’re at it! 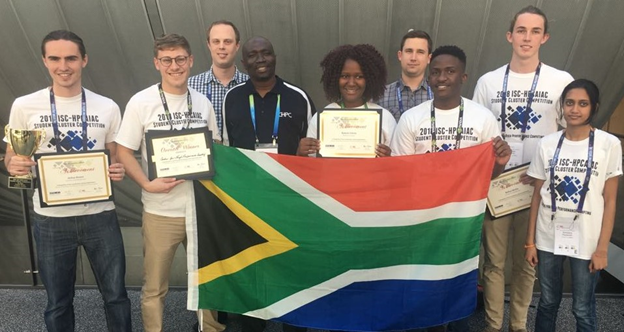 Student debt is not a detriment in South Africa, since higher education is often funded via “Bursary” agreements. Bursaries, supported by government or industrial stakeholders, not only ensure that students graduate with little or no debt, they’re guaranteed a job with the sponsoring organization upon graduation. Without student debt, they do not have to work while taking classes, have time to train, can accept unpaid internships and can participate in more workshops and technical conferences.

Common among the top three winning teams at ISC18 is that their countries hold national competitions. This not only adds another opportunity for students to gain experience, it allows team leaders to cherry-pick the most elite performers from a national pool of prospects. This could be a critically-important aspect of winning since it is unlikely that six elite performers would attend the same school.

South African and Nanyang teams have two female participants apiece, and SA’s team tends to be the most ethnically-diverse team represented. These faces will help a larger number of future prospects envision a path toward STEM excellence in a field that otherwise lacks diversity. Since women represent half of the world’s intellectual potential, there is a strong economic defense to facilitate their participation at all costs. We have known for years that diverse teams are more creative and make better decisions than homogeneous ones, and teams with more women are functionally “smarter.” Hopefully others will follow Nanyang and South Africa’s lead and support an inclusive performance technology industry for the future. 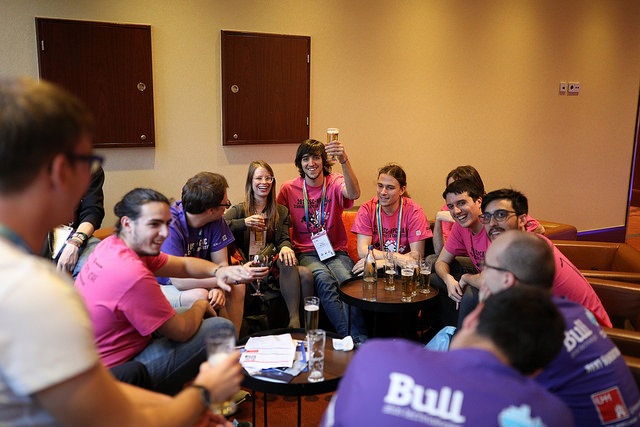