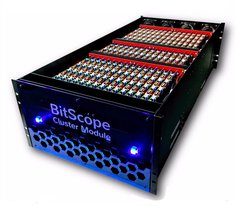 The system is intended to be used as a software development platform for applications that will eventually run on the lab’s production systems, the largest of which is Trinity. The rationale for this is rather straightforward: Instead of using an expensive, energy-demanding supercomputer to develop parallelized HPC applications, offload the task to an affordable Raspberry Pi cluster. The nodes are built with a credit-card sized ARM module, which draws just a few watts of power. While such a system delivers only a fraction of the performance of a traditional HPC machine, it offers the same sort of highly parallel platform that developers can utilize to build, scale and test software prior to deployment.

Gary Grider, leader of the High Performance Computing Division at Los Alamos National Laboratory, came up with when he realized that the production system and the development system need not be the same machine. “It’s not like you can keep a petascale machine around for R&D work in scalable systems software,” said Grider. “The Raspberry Pi modules let developers figure out how to write this software and get it to work reliably without having a dedicated testbed of the same size, which would cost a quarter billion dollars and use 25 megawatts of electricity.”

The 750-node system is encapsulated in five rack-mount cluster modules, each containing 150 quad-core ARM processors, and hooked together with integrated network switches. The 3,000-core cluster was developed by SICORP, a system integrator that serves government research labs, and BitScope Designs, an Australian manufacturer of mixed signal oscilloscopes, logic analyzers, and various types of test equipment. In this case, the cluster was a custom design, which leveraged the BitScope’s expertise with Raspberry Pi designs. According to company CEO Bruce Tulloch, they were able to build the entire system in less than three months.

The cost of the machine was not revealed.