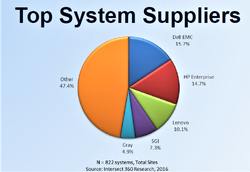 As a horizontal market, HPC encompasses a fairly wide range of product segments dominated by different vendors. To offer some perspective on this diversity, Intersect360 Research recently provided a synopsis of the leading suppliers of the major hardware and software categories that circumscribe the HPC space.

These top suppliers are based on the latest HPC site survey conducted by Intersect360, in this case a survey distributed in Q2 and Q3 of 2016. As such, the data reflects a pretty up-to-date view of the most popular hardware and software in use. They span the most critical HPC product categories, specifically systems, interconnects/networks, storage, accelerators, file systems, middleware, and applications. We encapsulate some of the highlights here.

In the system supplier category, Dell EMC, HP Enterprise (HPE) were essentially tied in popularity capturing 15.7 percent and 14.7 percent of survey respondents, respectively. Lenovo came in at number three with 10.1 percent. Further back was SGI at 7.3 percent and Cray at 4.9 percent. Since SGI is now part of HPE, it’s likely that HPE will take a definitive lead as the top HPC system vendor in 2017, barring other major moves by rival suppliers. 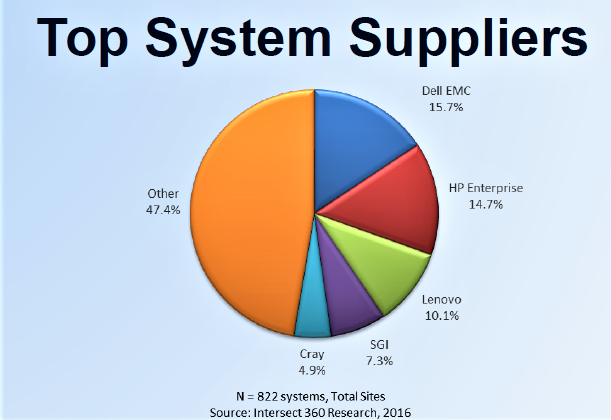 One interesting data point is that IBM is no longer a top system vendor in HPC as a result of selling its x86 server business to Lenovo. IBM’s Power-based server HPC business has not yet taken off the extent that would make it a force to be reckoned with, notwithstanding the fact that in a year or so, two of the largest supercomputers on the planets – Summit and Sierra – will be IBM Power-based systems.

The top HPC storage suppliers are Data Direct Networks, Dell EMC, and IBM, in that order. DDN’s dominance is nothing new, but according to the Interesect360 report, Dell EMC captured the number two spot as a result of the merger between Dell and EMC.

As expected, in the interconnects market, Mellanox leads the way, although not for local area networks, where Cisco’s Ethernet products still rule. Mellanox’s InfiniBand lineup is being challenged by Intel with its relatively new Omni-Path interconnect, which, according to Intersect360, was reported in a number of systems in 2016 and is expected to increase its share this year.

Also unsurprisingly, NVIDIA still dominates the accelerator market, showing up in three-quarters of the systems with such devices. Xeon Phi appears to be gaining in popularity, and is now present in somewhat less than 20 percent of accelerated systems according to the site survey. FPGAs remain a minor contributor to HPC acceleration, with less than a 2 percent system share.

The top middleware category distribution remained identical to that of the prior year, with programming environment, job management, and compilers leading the list of the most popular tools. Likewise for applications, where the top five packages, both open source and commercial, remained the same as in 2015.