IDCs Latest Forecast for the HPC Market: 2016 is Looking Good 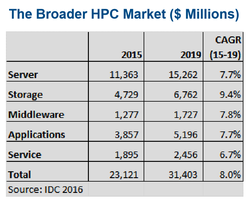 A couple of weeks ago, at SC16 in Salt Lake City, analyst firm IDC presented its bi-annual review of the latest trends in the HPC market. Overall, IDC is projecting annual growth of about 6 to 7 percent in 2016, which would put total HPC revenue at around $24.6 billion dollars for the year.

That’s a decent showing, although longer term, 2015 through 2019, IDC is forecasting a compounded annual growth rate (CAGR) of 8 percent, which would bring the total market to $31.4 billion at the close of the decade. Over that five-year period, HPC revenue from sales of servers, middleware, and applications will grow at about 7.7 percent, give or take a tenth of a percent. Storage revenue is projected to outperform all other categories with a 9.4 percent CAGR, while the services category will underperform with 6.7 percent growth. 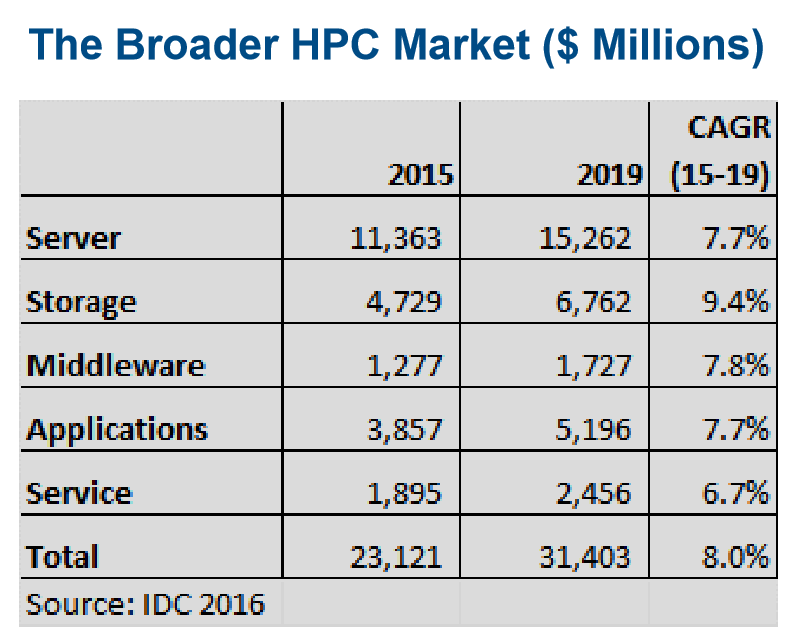 Servers are still the single biggest item, with $11.9 billion in sales projected for 2016. For the first six months of the year, IDC has tracked $5.2 billion in server sales, with HP Enterprise (HPE) dominating the field. The top three system providers during this period were HPE, with $1,866 million in sales, Dell, with $954 million, and Lenovo at $482 million. IBM, Cray, SGI (which is now part of HPE), Sugon, Fujitsu, NEC and Bull/Atos trail in that order.

From a system standpoint, that $5.2 billion of half-yearly server sales breaks down to $1.6 billion for supercomputers (systems over $500,000), $1.2 billion for divisional clusters ($250,000 to $500,000), $1.5 billion for departmental clusters ($100,000 to $250,000), and $0.9 billion for workgroup clusters (under $100,000). Note that IDC defines a rather big bucket for the supercomputing category, given that most HPC systems of more than a few racks would end up there. The firm says it will begin distinguishing very large systems with a separate line item to better track the high end of the market.

Part of the growth IDC is forecasting is being fueling by faster growing areas within the larger amorphous brew of HPC. These include performance-critical areas in deep learning, cloud computing, and big data. The latter is called high performance data analytics (HPDA) by the IDC digerati, which they say is growing at double-digit rates from a server standpoint. IDC estimates HPDA servers in traditional HPC segments, like government and academia, is expanding at 16.8 percent CAGR, while HPDA in the commercial realm is growing at 26.3 percent. That’s two to four times the rate of servers devoted to physics simulations and modeling.

HPDA application segments include those in scientific research, security/defense, cognitive computing, fraud detection, business intelligence, personalized medicine, and affinity marketing. IDC predicts that over the next three years, more than half of Fortune500 companies will add these high-end analytics capabilities. And by 2020, more than half of the world’s largest healthcare organizations will use HPC-powered analytics for their day-to-day business.

The faster growth of commercial HPDA is destined to carry more weight, since about a third of system utilization in industrial settings are already devoted to these big data applications according to IDC surveys. HPDA system utilization in the public sector is about half that (but growing). By itself, IDC predicts the HPDA market will reach about $3.9 billion in just three years, from a base of well under $1 billion today.

It’s interesting to note that about half of the HPDA users are telling IDC they are running their analytics work on the same system as their “regular” HPC applications. But the other half are either running them on a separate system or plan to do so in the next 6 or 18 months. Less than 3 percent of those who are running these workloads on a separate machine plan to consolidate them onto their common HPC system.

Part of the HPDA market that is particularly interesting to IDC is the HPC technology that underlies AI computing. That includes areas in cognitive computing, the Internet of Things, machine learning, and so on. Although IDC has not thrown out any numbers on this still-nascent market, CAGR or otherwise, they recognize that high performance computing is already a crucial element to this application space.

Given the growth trajectory of HPDA and the potential upside of the AI space, it’s perhaps a little surprising that IDC is forecasting only an 8 percent CAGR through 2019. After all, in the first half of the decade, before the analytics surge, and certainly before the advent of commercial AI, IDC was forecasting growth rates in the general vicinity of 7 percent. Is the big data and AI revolution only worth 1 percent to the HPC market over the next five years?

Of course, there are a lot of other factors that go into market models. For one thing, there has been a general slowdown over the last three years in the performance advancements of top supercomputers. There have also been financial headwinds of late caused by unfavorable macroeconomic conditions -- in China and Europe, particularly. In addition, there are changing budgetary constraints being imposed on both businesses and government organizations as they adapt to those conditions. Does any of this factor in to IDC’s forecasts? If you want that kind of granular information, you’ll probably have to buy a report or two from them.