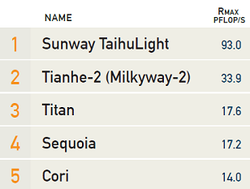 FRANKFURT, Germany; BERKELEY, Calif.; and KNOXVILLE, Tenn.— The 48th edition of the TOP500 list saw China and United States pacing each other for supercomputing supremacy. Both nations now claim 171 systems apiece in the latest rankings, accounting for two-thirds of the list. However, China has maintained its dominance at the top of the list with the same number 1 and 2 systems from six months ago: Sunway TaihuLight, at 93 petaflops, and Tianhe-2, at 34 petaflops. This latest edition of the TOP500 was announced Monday, November 14, at the SC16 conference in Salt Lake City, Utah.

In addition to matching each other in system count in the latest rankings, China and the US are running neck and neck in aggregate Linpack performance. The US holds the narrowest of leads, with 33.9 percent of the total; China is second with 33.3 percent. The total performance of all 500 computers on the list is now 672 petaflops, a 60 percent increase from a year ago.

The top of the list did receive a mild shakeup with two new systems in the top ten. The Cori supercomputer, a Cray XC40 system installed at Berkeley Lab’s National Energy Research Scientific Computing Center (NERSC), slipped into the number 5 slot with a Linpack rating of 14.0 petaflops. Right behind it at number 6 is the new Oakforest-PACS supercomputer, a Fujitsu PRIMERGY CX1640 M1 cluster, which recorded a Linpack mark of 13.6 petaflops. Oakforest-PACS is up and running at Japan’s Joint Center for Advanced High Performance Computing (JCAHPC). Both machines owe their computing prowess to the Intel “Knights Landing” Xeon Phi 7250, a 68-core processor that delivers 3 peak teraflops of performance.

The addition of Cori and Oakforest-PACS pushed every system below them a couple of notches down, with the exception of Piz Daint, a Cray supercomputer installed at the Swiss National Supercomputing Centre (CSCS). It maintained its spot at number 8 as a result of a massive 3.5 petaflop upgrade, courtesy of newly installed NVIDIA P100 Tesla GPUs.

Piz Daint also has the honor of being the second most energy-efficient supercomputer in the TOP500, with a rating of 7.45 gigaflops/watt. It is topped by NVIDIA’s in-house DGX SATURNV  system, the only other system on the list equipped with the new P100 GPUs. It is a 3.3-petaflop cluster of DGX-1 servers that delivers 9.46 gigaflops/watt. To offer some perspective here, the nominal goal for the first exascale systems is 50 gigaflops/watt.

Systems greater than one petaflop now occupy the first 117 positions – nearly a quarter of the TOP500. A year ago, that number was 81. At the other end of the list, the entry level system is now 349.3 teraflops, compared to 206.3 teraflops in November 2015.

A total of 96 systems on the TOP500 are using manycore accelerator technology, down from 104 systems a year ago. For the 86 systems configured with coprocessor accelerators, 60 use NVIDIA GPUs, 21 use Intel Xeon Phi cards, one uses AMD FirePro GPUs, one uses PEZY technology, and three systems use a combination of NVIDIA GPUs and Intel Xeon Phi coprocessors. The remaining 10 systems use the latest Xeon Phi “Knights Landing” processors as the main processing unit. They represent the first systems on the TOP500 that employ manycore technology as standalone processors.

Intel continues to be the dominant chip provider, claiming representation in 462 (92.4 percent) of all systems. IBM Power processors are present in 22 systems. AMD processor share continues to decline, with just 7 systems on the current list, down from 13 systems just six months ago.

InfiniBand technology is now found on 187 systems, down from 205 systems six months ago, and is now the second most used system interconnect in the TOP500. Gigabit Ethernet is now at 206 systems down from 218 systems, in large part thanks to 178 systems now using 10 Gigabit Ethernet technology. Intel Omni-Path technology which made its first appearance on the list six month ago with 8 systems, is now present in 28 systems, including the new 13.6 petaflop Oakforest-PACS supercomputer.

Of all system providers, Hewlett Packard Enterprise (HPE) claims the most systems with 140. That number includes the 28 systems installed by SGI, which has been acquired by HPE. In second place is Lenovo with 92 systems. Cray claims just 56 systems, but it continues to lead all vendors in aggregate performance with 21.3 percent of the total. IBM is now in 5th place in the systems category with 33, all of which were present on the previous list.

The first version of what became today’s TOP500 list started as an exercise for a small conference in Germany in June 1993. Out of curiosity, the authors decided to revisit the list in November 1993 to see how things had changed. About that time they realized they might be onto something and decided to continue compiling the list, which is now a much-anticipated, much-watched and much-debated twice-yearly event.