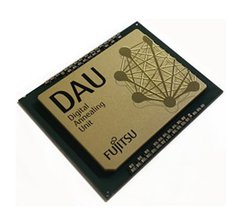 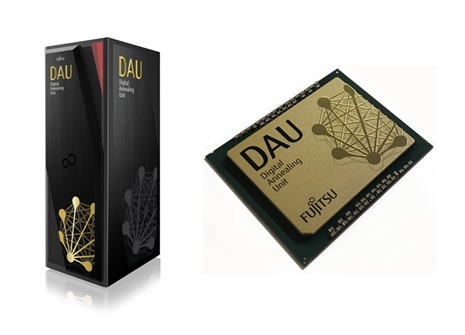 As a quantum annealing processor, the DAU is unique. Unlike D-Wave’s quantum annealing chip, which relies on superconducting circuitry and must be cooled to near absolute zero to operate, the DAU uses standard CMOS technology and can be run at room temperature.

Fujitsu designed the DAU based on something called an “optimization circuit,” which employ probability theory to search for optimal states.  This first chip is comprised of 1,024 bit, all of which are fully connected with one another. It supports 16-bit precision, offering 65,536 gradations. Fujitsu is also working on a much more powerful processor, with 8,192 bits and 64-bit precision and will support 18.45 quintillion gradations.

The DAU has been in the works since at least as far back as 2016, when Fujitsu announced it had build a prototype platform based on FPGAs. At the time, the company said the architecture is “capable of performing computations some 10,000 times faster than a conventional computer.”

Of course, that level of performance is restricted to a certain class of problems, which fall under the general category of combinatorial optimization problems. These tend to very computationally expensive on conventional computers, but which can be solved at high speed on quantum architectures. This applies to areas like drug discovery, financial portfolio optimization, and factory logistics, to name just a few.

Fujitsu is initially taking aim at four fields – transportation, networking, finance, and healthcare – and is teaming up the University of Toronto to conduct quantum annealing research projects in each of these areas.  One of the healthcare projects involves optimizing radiotherapy planning, with the aim of cutting down on the number of days needed for treatment.

The DAU is being initially offered as an online service, with the rather long-winded title of Quantum-inspired Computing Digital Annealer Cloud Service. It will be available via a cloud set-up supplied by 1QB Information Technologies Inc., a software vendor specializing in quantum computing. In conjunction with the cloud product, Fujitsu is also offering customers a technical service to support application development.

Fujitsu has already conducted early trials with a number of customers, including Recruit Communications, Mitsubishi UFJ Trust Investment Technology Institute, Fujifilm, and Fixstars. It has also been used trialed by Fujitsu’s own IT Products group, which used the technology to reduce transfer distance by up to 45 percent in its warehouses.

The service is currently only available in Japan, but the plan is to expand to North America, Europe, and elsewhere in Asia during FY18. Fujitsu is also planning to eventually sell Digital Annealer systems to organizations for in-house quantum computing.

In addition, the Digital Annealer will be one of three technologies – the other two being HPC and artificial intelligence – that will form the basis of a Fujitsu’s new AI headquarters in Vancouver Canada. The company plans to open the office in the first half of FY18.