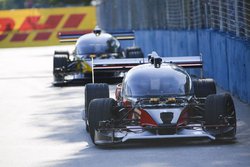 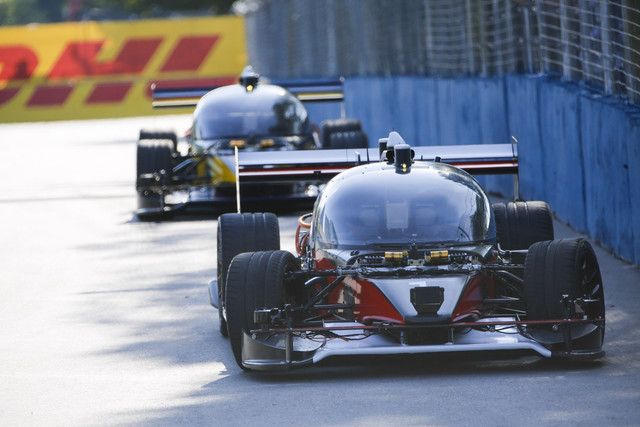 The world’s first auto race between self-driving vehicles didn’t exactly go according to plan. One of the two robotic racecars misjudged a corner at high speed, crashing into the barrier and ending its hopes of finishing the contest.

Or rather, ending the hopes of its designers. The vehicle itself was unmanned, having been sent into the race with only AI software on board. The other robotic car was able to finish the contest unscathed, capturing the win by default. According to reports, that vehicle even managed to avoid hitting a dog that had wandered onto the course.

The event, known as Roborace took place in Buenos Aires, Argentina last Saturday, billing itself as “the global championship of intelligence and technology.” The first public outing pitted two driveless Formula E vehicles (electric racecars) against one another. The winner was able to reach a speed of 116 mph (187 km/hr), which is about half the maximum speed of a Formula 1 racecar, but pretty close to top speed for a Formula E vehicle.

According to a BBC report, Roborace's chief marketing officer, Justin Cooke, noted that although one of the racecars was damaged, it was repairable. "It's actually fantastic for us because the more we see these moments the more we are able to learn and understand what was the thinking behind the computer and its data,” he said.

The cars are guided by a light detection and ranging (LIDAR) system, along with other sensors, and communicate with one another during the race to avoid collisions. The key to the vehicle’s navigation though, is the on-board AI software, which controls all the steering and acceleration.

The event was a prelude to a future contest that will pit ten self-driving racecars against one another, each powered by different AI software.