A report published by James Kisner, an equity analyst at global investment banking firm Jeffries, shot a few holes in IBM’s Watson and the company’s cognitive computing strategy. Along the way, Kisner offered some interesting insights into the AI market and some of the major players competing in the space.

The thrust of the report was that even though Watson is currently one of more mature cognitive computing platforms in the market, customer deployments have relied on expensive service and consulting engagements with IBM, which would limit broader adoption. The report also found that other firms were out-recruiting IBM for available AI talent and this would degrade the company’s competitive position in the long-term.

Kisner concluded that IBM is likely investing more money into Watson than it’s currently recouping in sales. At least that’s his best guess. As the report notes, IBM has been reticent to share financial data on Watson, both on the investment side and the revenue side.  According to a recent 10-K disclosure from IBM though, the company has spent $15 billion on its cognitive computing efforts from 2010 through 2015, which doesn’t include the $5 billion in AI-related acquisitions, such as The Weather Channel and Truven Health. Watson R&D is certainly a decent chunk of this overall spending, but no one outside of IBM knows for sure.

Regarding the high price of servicing Watson, Kisner refers to it a “Cadillac” solution, writing: “Our checks suggest that IBM’s Watson platform remains one of the most complete off-the-shelf platforms available on the marketplace. However, many new engagements require significant consulting work to gather and curate data. Our checks suggest that Watson is a finicky eater when it comes to data enterprises can feed it – in other words, IBM has very exacting standards for data preparation. The halt of and cost overruns in the MD Anderson engagement with Watson epitomize our concerns here.”

The latter refers to the MD Anderson Cancer Center ditching its Watson pilot project in 2016 after switching to a new database, which would have entailed additional integration work. At that point MD Anderson had already sunk $62 million into the effort. As a result, the center was not able to deploy the technology for clinical use.

As Kisner notes, the irony here is that a significant portion of Watson’s revenue is going to be generated from consultation, which is the very thing he believes will hinder its wider adoption. That’s not to say that IBM can’t make a going concern out of the business. As the AI space matures, there’s likely to be an array of offerings from providers aimed at different levels of users – from consumers to Fortune 500 companies. IBM is going to be focused at the high end of that spectrum.

Another factor to be consider is the relative value of the intellectual property in Watson, all of which lies in its software.  According to Kisner though, in the world of AI today, it is data and talent that have the most value, not the algorithms. Moreover, much of software, especially the deep learning frameworks, in the AI space developed by Google, Microsoft, Amazon and others, is now open source, and thus widely accessible. Although Watson is available as a cloud service, complete with an API interface, it charges a fee ($0.0025) for each API query.

On the data side, IBM owns the meteorological dataset from its Weather Channel acquisition, as well as Truven Health’s database. But compared to the data repositories available to the web giants like Amazon, Google and Facebook, IBM’s data resources are much more limited in scope and size.

Talent is also a problem for IBM, says Kisner. For this, he used AI-related job openings as a sort of proxy for a company’s ability to recruit individuals. When looking at the data, companies like Amazon, Microsoft, and Apple had many more job opening in this area that IBM. (Amazon had 10 times as many as IBM.) 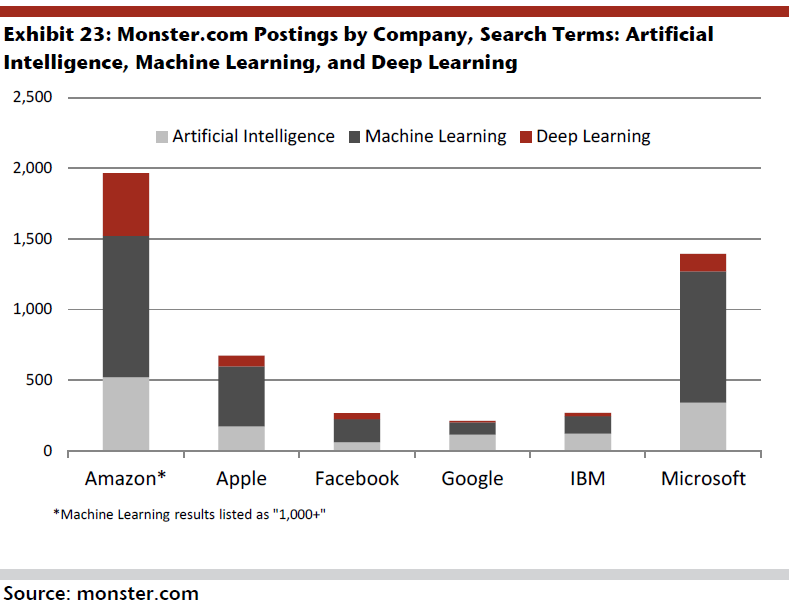 Here Kisner seems to be skating on somewhat thin ice.  Looking at job openings ignores the fact that some companies may already have assembled a talent base, or are able to draw from employees working elsewhere in the company or through acquisitions. It’s notable that Google had even less job openings than IBM, even though they are widely considered one of the leaders in the AI space. Nevertheless, the analysis paints a competitive landscape where AI talent will likely gravitate toward the biggest users and providers of this technology, and those tend to be the hyperscale web companies.

Looking at the broader AI space, the report notes that analysts like IDC and Tractica project that the market is growing at a double-digit pace.  IDC forecasts that cognitive software will increase at an 18 percent CAGR from 2016 to 2020, growing from $1.6 billion to $6.3 billion over this period. Tractica is even more bullish, predicting a 40-fold increase in the AI market from 2016 to 2025, at which point companies will be spending about $60 billion per year. And these numbers largely ignore the internal use of this technology at the big web companies.

Much of this growth is being enabled by advances in parallel computing and related high performance computing gear. On this last count, the report calls out three hardware provide that are benefitting from the AI surge, namely NVIDIA (of course), but also Mellanox and Pure Storage. In the case of Mellanox, Jeffries analysts believe the demand of high-performance interconnects will drive more revenue, with the caveat that “this doesn’t yet outweigh our concerns around ramping competition from Intel’s Omni-Path.” For Pure Storage, a company providing all-flash storage solutions, the benefit will be derived from AI use cases with datasets more than 10 terabytes.

None of those companies compete with IBM – in fact, they are partners.  But IBM does face competition in the cognitive services space. Rivals include Microsoft, Oracle, and SAP, all of which, writes Kisner, “have significant machine learning efforts underway and may be more credible threats in the Enterprise near-term. IBM may also end up losing some market share to Cisco. It recently acquired MindMeld, a startup that has developed conversational AI technology for voice and chat assistants.

Products and services driving this rapid ramp-up include applications in robotics, augmented and virtual reality, autonomous vehicles, chatbots, language translation and analysis, and computer vision. Nearly every industry will be impacted, with transformational effects in areas such as healthcare, transportation, consumer electronics, and retail.

Nevertheless, it will take some time AI applications to become widespread.  Using Gartner forecasts as a guide, the report states that in the near-term, speech and image recognition are going to be adopted the fastest – over the next two years. Further out in the two-to-five-year timeframe will be products like virtual customer assistants and smart appliances. In five to ten years, they expect smart robots, commercial drones, virtual personal assistants, and the use of conversational user interfaces to become widespread. Autonomous vehicles are projected to go mainstream after 10 years.

The report also outlines some other aspects of the AI space, including a nice overview of the acquisition landscape, as well the different APIs currently available. In addition, it provides a detailed financial analysis of Watson’s revenue potential under a number of different scenarios. All in all, a good read for anyone interested in Watson or the broader AI market.