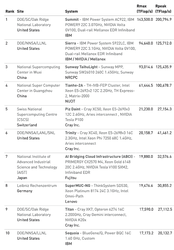 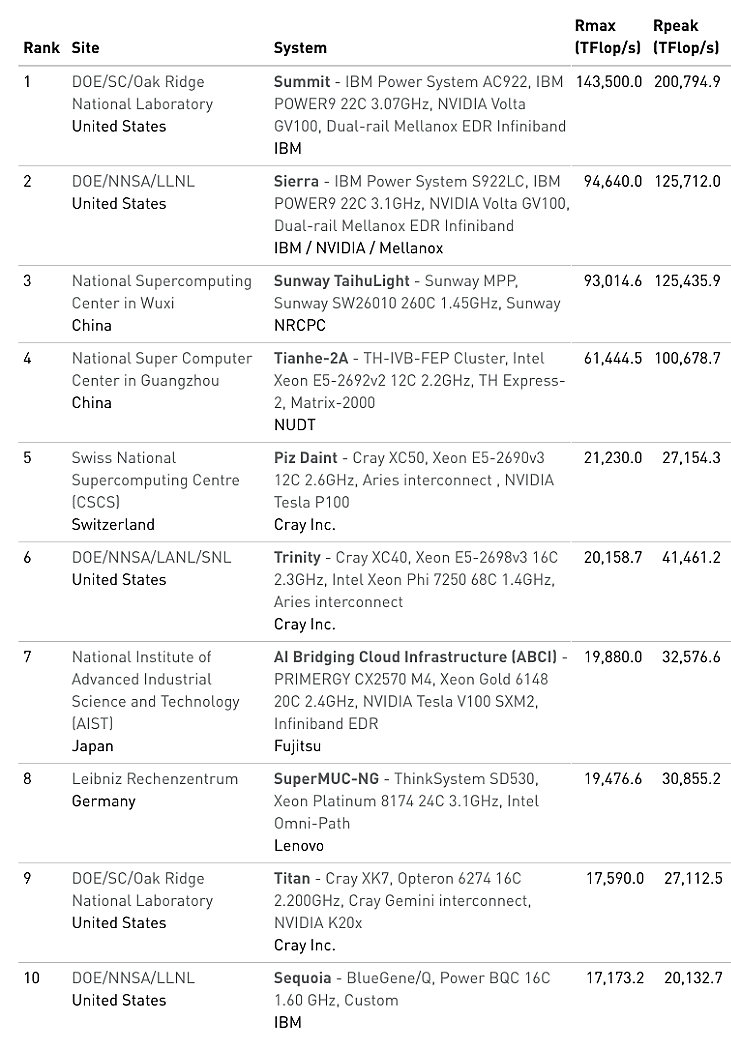 Summit widened its lead as the number one system, improving its High Performance Linpack (HPL) score from 122.3 to 143.5 petaflops since its debut on the previous list in June 2018. Sierra also added to its HPL result from six months ago, going from 71.6 to 94.6 petaflops, enough to bump it from the number three position to number two. Both are IBM-built supercomputers, powered by Power9 CPUs and NVIDIA V100 GPUs.

Sierra’s ascendance pushed China’s Sunway TaihuLight supercomputer, installed at the National Supercomputing Center in Wuxi, into third place. Prior to last June, it had held the top position on the TOP500 list for two years with its HPL performance of 93.0 petaflops. TaihuLight was developed by China’s National Research Center of Parallel Computer Engineering & Technology (NRCPC).

Tianhe-2A (Milky Way-2A), deployed at the National Supercomputer Center in Guangzho, China, is now in the number four position with a Linpack score of 61.4 petaflops. It was upgraded earlier this year by China’s National University of Defense Technology (NUDT), replacing the older Intel Xeon Phi accelerators with the proprietary Matrix-2000 chips.

At number five is Piz Daint, a Cray XC50 system installed at the Swiss National Supercomputing Centre (CSCS) in Lugano, Switzerland. At 21.2 petaflops, it maintains its standing as the most powerful system in Europe. It is powered by a combination of Intel Xeon processors and NVIDIA Tesla P100 GPUs

Trinity a Cray XC40 system operated by Los Alamos National Laboratory and Sandia National Laboratories improved its performance to 20.2 petaflops, enough to move it up one position to the number six spot. It uses Intel Xeon Phi processors, the only top ten system to do so.

The AI Bridging Cloud Infrastructure (ABCI) installed in Japan at the National Institute of Advanced Industrial Science and Technology (AIST) is listed at number seven with a Linpack mark of 19.9 petaflops. The Fujitsu-built system is powered by Intel Xeon Gold processors, along with NVIDIA Tesla V100 GPUs.

Germany provided a new top ten entry with SuperMUC-NG, a Lenovo-built supercomputer installed at the Leibniz Supercomputing Centre (Leibniz-Rechenzentrum) in Garching, near Munich. With more than 311,040 Intel Xeon cores and an HPL performance of 19.5 petaflops, it captured the number eight position.

Titan, a Cray XK7 installed at the DOE’s Oak Ridge National Laboratory, and previously the most powerful supercomputer in the US, is now the number nine system. It achieved 17.6 petaflops using NVIDIA K20x GPU accelerators.

Sequoia, an IBM BlueGene/Q supercomputer installed at DOE’s Lawrence Livermore National Laboratory, is the 10th-ranked TOP500 system. It was first delivered in 2011, achieving 17.2 petaflops on HPL.

The share of TOP500 installations in China continues to rise, with the country now claiming 227 systems (45 percent of the total). The number of supercomputers that call the US home continues to decline, reaching an all-time low of 109 (22 percent of the total). However, systems in the US are, on average, more powerful, resulting in an aggregate system performance of 38 percent, compared to 31 percent for China.

Japan is third in system share, with 31 systems, followed by the UK, with 21, France with 18, Germany with 17, and Ireland with 12. All other countries have fewer than ten systems on the list.

There are now 429 supercomputers on the TOP500 list that deliver over one petaflop on the Linpack benchmark, up from 272 systems six months ago. The entry point to the list is now 874.8 teraflops, with the entry point for the top 100 systems at 1.97 petaflops.

Intel continues to provide the processors for the largest number of TOP500 systems, with a dominating 95.2 percent share. There are just three systems on the latest list powered by AMD CPUs.

For the first time, an ARM-powered supercomputer has made it into the TOP500 rankings. The new system, known as Astra, is an HPE-built supercomputer deployed at Sandia National Laboratories. It’s powered by 125,328 Cavium ThunderX2 cores and has achieved an HPL Linpack score of 1.5 petaflops. It enters the list at number 205.

The aggregate performance of the entire list has increased to 1.42 exaflops, up from 1.21 exaflops six months ago.

The most energy-efficient system on the Green500 list is once again the Shoubu system B, a ZettaScaler-2.2 supercomputer installed at the Advanced Center for Computing and Communication, RIKEN, Japan. It was remeasured and achieved 17.6 gigaflops/watt during its 1.06 petaflops Linpack performance run. It occupies position 376 on the TOP500 list.

In second position on the Green500 is the DGX SaturnV Volta system, an NVIDIA system installed at NVIDIA, USA. It achieved 15.1 gigaflops/watt and is in position 375 on the TOP500 list.

At number three is the Summit system at the Oak Ridge National Laboratory. It achieved 14.7 gigaflops/watt and is listed at number one in the TOP500.

At number four is the AI Bridging Cloud Infrastructure (ABCI) system installed at the National Institute of Advanced Industrial Science and Technology (AIST). It achieved 14.4 gigaflops/watt and is listed at number seven in the TOP500.