Applied Micro announced it is sampling X-Gene 3, its third-generation ARM SoC for servers. According to a report by The Linley Group, the new platform will provide comparable performance to the latest Intel Xeon processors, but at a significantly lower price point.

Applied Micro, which is now a part of semiconductor firm MACOM, officially launched X-Gene 3 last November, but this week’s news that it is sampling the chips, as well as shipping to select customers, put the new product on glide path to general availability later this year. Besides Applied Micro/MACOM, Cavium and Qualcomm are also putting new ARM designs into the field in 2017: the ThunderX2 and Centriq 2400 SoCs, respectively. 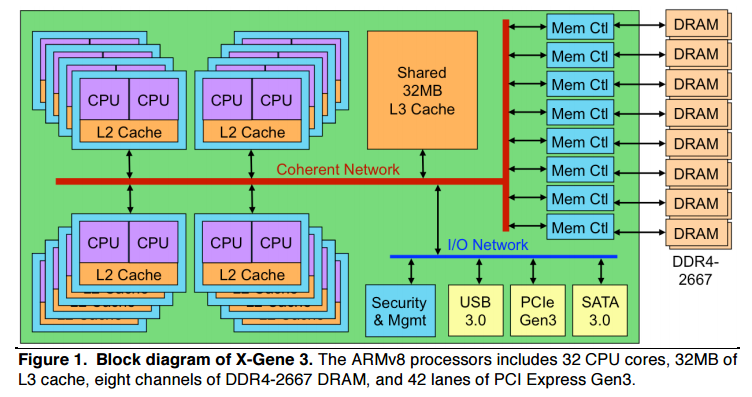 How these new ARM designs stack up against one another, and against the current crop of Intel Xeon processors, is outlinef in a new report written by Linley Gwennap, principal analyst at

The Linley Group and editor-in-chief of Microprocessor Report. In nutshell, Gwennap believes the new X-Gene will perform as well or better than a comparable Xeon processor on many cloud workloads, as well as for some HPC applications. He also considers the new Applied Micro platform superior to that of its ARM competition, performance-wise.

X-Gene 3 respectable performance profile is a result of its relatively high clock speed and memory bandwidth. The CPU runs its 32 cores at a base frequency of 3.0 GHz, and can achieve 3.3 GHz under turbo mode. To feed those cores with data, the chip includes eight memory channels, which can serve DDR4 devices at up to 2667 MHz, yielding 170 GB/sec of aggregate bandwidth. The SoC also includes 42 lanes of PCIe 3.0 links for external connectivity.

According to Gwennap, that has resulted on several impressive performance benchmarks, based on the early silicon. From the report:

“Based on testing of the current configuration of 3.0GHz CPU frequency and DDR4-2400, the company expects the chip to deliver a SPECint_rate2006 (peak) score of at least 500 when running at its peak speed of 3.3GHz and DDR4-2667 and with some additional hardware and compiler tuning. This score is well ahead of that of any other ARM processor and similar to that of mainstream Xeon E5 processors.”

A tabular comparison against the comparable Intel Xeon processors is provided below.

Gwennap concedes that some Xeon SKUs with more cores or higher clock speeds than the E5-2680 are available, and these will deliver better performance than the X-Gene 3. But those are high-end chips, priced above $2,000, and are not aimed at the mainstream cloud and enterprise computing market Applied Micro is targeting.

As far as the ARM competition, Gwennap maintains the X-Gene 3 should be able to outrun both Cavium’s latest ThunderX2 SoC and Qualcomm’s new Centriq 2400 chip. Although the per-core performance of the upcoming ThunderX2 should be much improved from Cavium’s first-generation product, he doesn’t expect it will compete against the more performant X-Gene 3. Likewise, Gwennap believes the Qualcomm offering will have a similar performance profile to the ThunderX2, although he admits not much technical information has been forthcoming about its capabilities

The report states that the X-Gene 3 can handle a “a broad range of cloud workloads, including scale-up and scale-out applications.” It should be particular adept at so-called big data applications like in-memory database processing, thanks to its superior memory bandwidth. Coincidently (or perhaps not), AMD is touting its upcoming “Naples” x86 chip for very similar memory bandwidth capabilities, based on the same 8-channel per socket design.

One important caveat: the X-Gene 3 is not competitive with the Xeon with regard to floating point performance, and that gap will widen when the Skylake processors, with AVX-512 support, become available. Nevertheless, that doesn’t rule out all HPC applications. The report mentions deep learning inferencing as one example. Certain types of bioinformatics applications that mostly use scalar processing would be another candidate. But for more mainstream HPC workloads, the X-Gene 3 would need to rely on a GPU or other floating point accelerator to deliver competitive performance.

There’s nothing particularly exciting about achieving comparable performance to an Intel Xeon, but Applied Micro believes it has a compelling story to tell on the price front. Although specific X-Gene 3 product pricing has not been specified, they are looking to offer a list price about a third less than the $1745 Xeon E5-2680. Other ARM chipmakers are looking at undercutting their Intel competition in a similar manner. Of course, Intel could always lower its prices or offer other financial incentives to narrow that cost differential.

And in fact, some of that is bound to occur. With competition from AMD’s upcoming Naples CPU on the horizon, Intel will probably need to narrow its margins on its Xeon products in order to maintain market share. Also, Microsoft recently revealed it is working with both Cavium and Qualcomm to build ARM-based servers for their datacenters. The idea is to deploy these both internally and, eventually, in their public Azure cloud. If Microsoft’s gambit proves economical, you could see other hyperscalers start to move some of their capacity to ARM servers as weill. Over the next 12 months, we should see an interesting set of moves and counter-moves by all these chipmakers as these dynamics play out in the market.